Most times a costume project involves a long planning process and careful thinking. My latest costume came up as a sudden idea on Sunday, and now I'm planning to debut it at Avesta Con last weekend in October.

I'm not a Harry Potter fan, but I  enjoy bith 5he films and the books. Still I've never felt like doing a costume from them. On Sunday Artyanna posted a line about doing a Hufflepuff costume and I started thinking...

I am a proud Ravenclaw and three years ago when I visited the Harry Potter studio tour I almost bought the official cardigan. Not because of me being a HP fan but because it looked good and I was on the hunt for a nice grey cardigan. I didn't buy it but spent two years regretting it. Last year my sister and nieces went to the studio tour and they bought the cardigan for me. So I own the right cardigan, I then looked around and found my favorite wool skirt and a white shirt after my father and I realized that I already have most components of a Hogwarts uniform. I also have a blonde wig from my Elsa UFO. 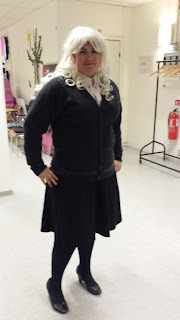 When I put all these things on I realized that I should have done Luna Lovegood years ago, and she's such a great character to cosplay.

I also need to find a pair of flat Mary Janes and learn how to tie a tie properly but I hopw that's not too hard.
Posted by bandykullan at 22:04 No comments:

At Comic-Con I did get some photos taken of my superhero Bellossom, I guess I should call her super-Bellossom or something. All photos are from Tom Larsson, or at least his camera. 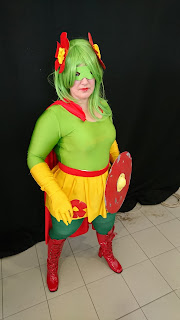 The costume consists of one green longsleeved dance leotard. This is a good proof that you get what you pay for. I first bought a really cheap one from ebay, and it had a strange green colour and everything about it was cheap and low quality. I then bought this version from an actual dancewear shop, and it was so good. It's really tight, but holds everything in place while still being comfortable. I actually wore it under my Mon Mothma most of the weekend to make it easy to switch between costumes. Thanks to this leotard this is probably one of my most comfortable costumes.

I did wear a pair of green tights under it all as well, since the skirt turned out a lot shortern than I had planned at first. 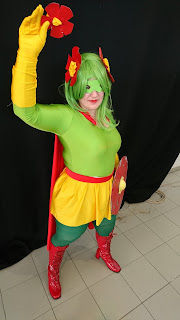 The skirt and gloves are made from lycra. The skirt turned out so short because when I made it I happened to get a stain on it at around knee level, so I cut it shorter, but didn't first realise just how much shorter I had cut it. A good thing with lycra is that it doesn't fray so I didn't have to he anything. The gloves as you can see had a tendency to slide down on the arms though.

The cape and belt are also made from lycra. The belt was a really ugly leather belt, pink and embossed with flowers, that I found at an op shop and simply covered with the lycra. I kept the buckle, but it's in the back so you can't see it because of the cape. The cape is just lightly handstitched to the leotard at the front.

The boots are a pair of red gogo-boots, and I think I'm going to make a separate post about them. 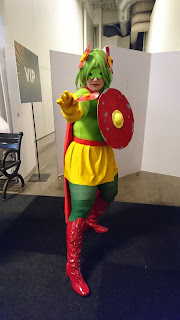 I had originally planned to use my hairflowers that I made for the the other Bellossom costume, but they were too big and heavy. These ones are made from transparent worbla, with a small piece of yellow lycra as the centre. They are attached with magnets to a headband that I'm wearing under the wig. The throw-flower is also made from transparent worbla. The shield is a plastic viking shild I found at a toystore and repainted. I couldn't get it quite as smooth and shiny as I wanted, so instead I made sure to give it a lot of battle damage.

Finally the eyemask is made of fosshape and held on by an elastic under the wig.

Me and Tom as the dynamic pokémon duo of Captain Carp and Bellossom-girl. 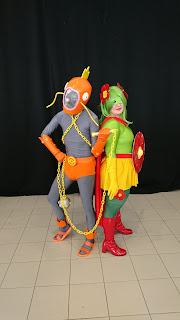 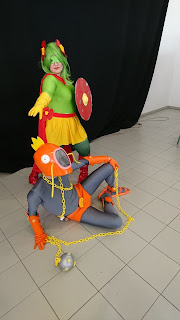 And finally some of the people from Cosplay Dalarna that were at Comic Con Stockholm. Posted by bandykullan at 08:44 No comments:

ComicCon without a camera

Last weekend it was Stockholm ComicCon. I managed to go there and not take a single photo during the whole con (Fri-Sun). The main reason was simply that none of my costumes had any pockets, and unlike for example NärCon I didn't just walk around with a friend and talk to people. I was mostly just in the Nordic Legions stand, the cosplay parade or posing with Tom from Cosplay Dalarna in our Superhero project.

That project is also a big reason why I haven't posted much lately. It's been the only cosplay that I've worked on, but I've also felt very uncomfortable about it and I really wasn't sure how I felt about actually wearing it. The superhero project is such a good example of the fun ideas you can come up with when you just hang around with the right people. During one of our regular Tuesday meetings we started talking about doing Pokémon costumes, for some reason we came up with the idea of "what if we did a mashup of superheros and pokémons?".  Then it just spiraled from there...

I was already set on doing my Bellossom cosplay, so of course I wanted to do a superhero Bellossom as well. In the end I didn't use any elements from my first costume for this superhero costume though. Dressing up as superhero was a challenge though. I am plussized, and on the BMI charts I probably count as obese, and now I decided to go for a classic 1960's spandex style superhero. It didn't get better when I managed to cut my skirt a bit shorter than planned, so it almost didn't cover my bum. In the end I had a lot of fun though, and it was a really comfy costume. I don't think anyone that saw me without my Magikarp partner understood that I was a pokemon though.

Some photos were taken of the costume, but I haven't gotten them yet. Until then I can show you this photo by Hamza Mazni 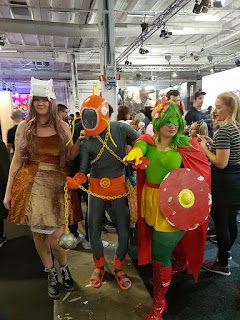 And this video from the cosplay walk-on parade, we are on 5 minutes in

The only SW costume I brought with me was Mon Mothma, but I used my other wig for it. I really liked this wig for the style and fit, it really looked naturally, but the colour is a bit too Brown. I would love to have the same style, but the colour of the other Mon Mothma wig.

This is one of the official Nordic Legions photos

I really liked having the Mandalorians fully integrated within the Nordic Legions. On Sunday we also did a small Bounty hunt, when they were searching for me throughout the Convention. It's easier to find a jedi with a lightsabre than a short woman in brown hair, so I almost had to give myself up for them to find me though.

Me and Jenny also got interviewed by the Swedish tabloid Expressen about our costumes and what the Nordic Legions do.

Posted by bandykullan at 22:25 No comments: