Yesterday I had invited people to come home to me and we would have an afternoon of sewing and talking. It was a really nice afternoon. In the end it was me, Sara and my sister Lotta, who spent some hours together. We did sew some, but also took the chance of going through my costuming books, watching costume videos on  youtube and simply talk. I worked away on the embroidery for my Elsa, and unfortunately I must say it takes a lot longer than I have planned. As I see it I might not even finish it this year, but I would be really happy if I could wear it in the end of November. 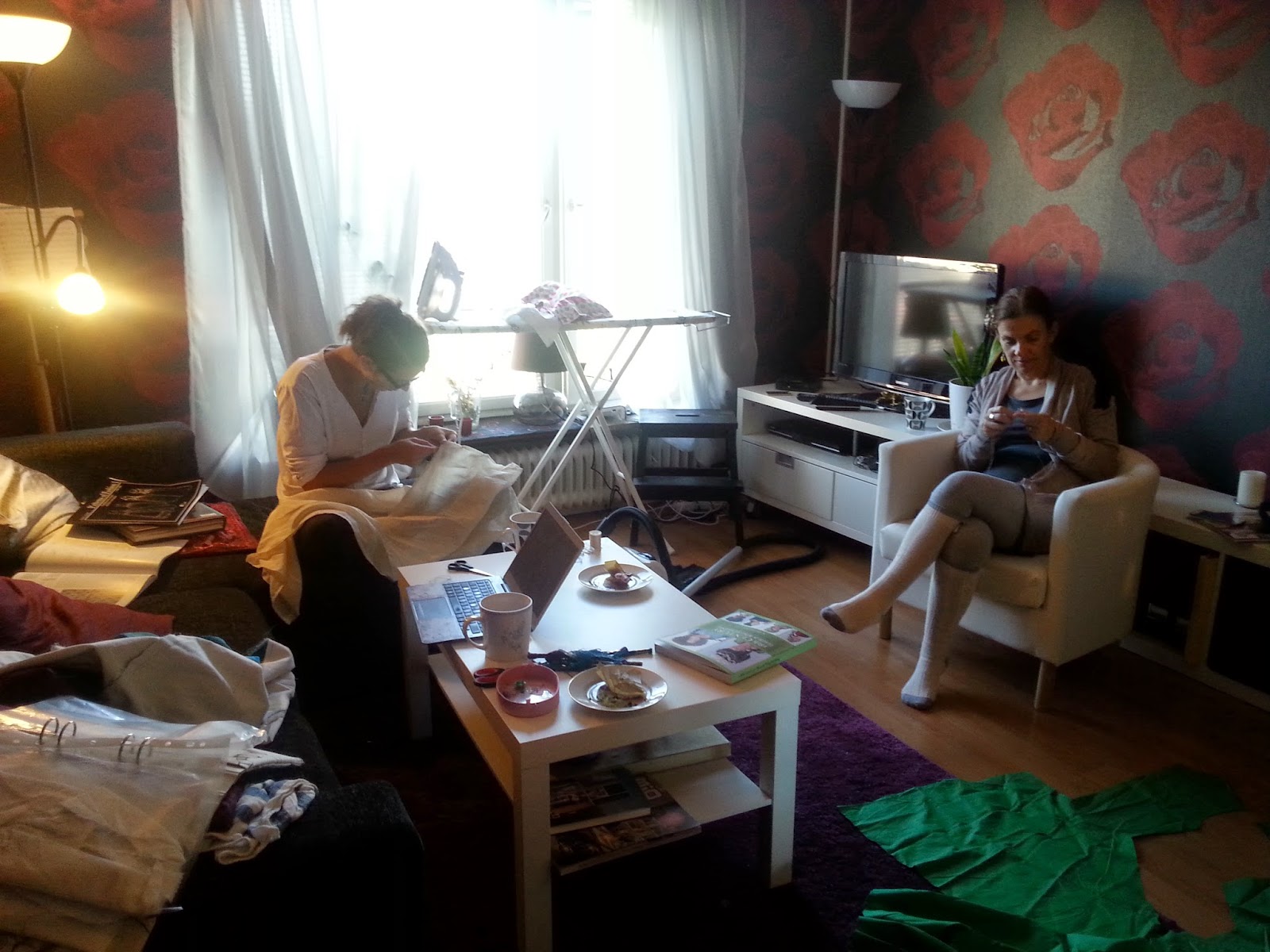 Sara and Lotta working away.

I had also taken the chance to do some baking, and since I can't really contain myself when I bake we didn't have a chance of finishing all the goodies in one afternoon. 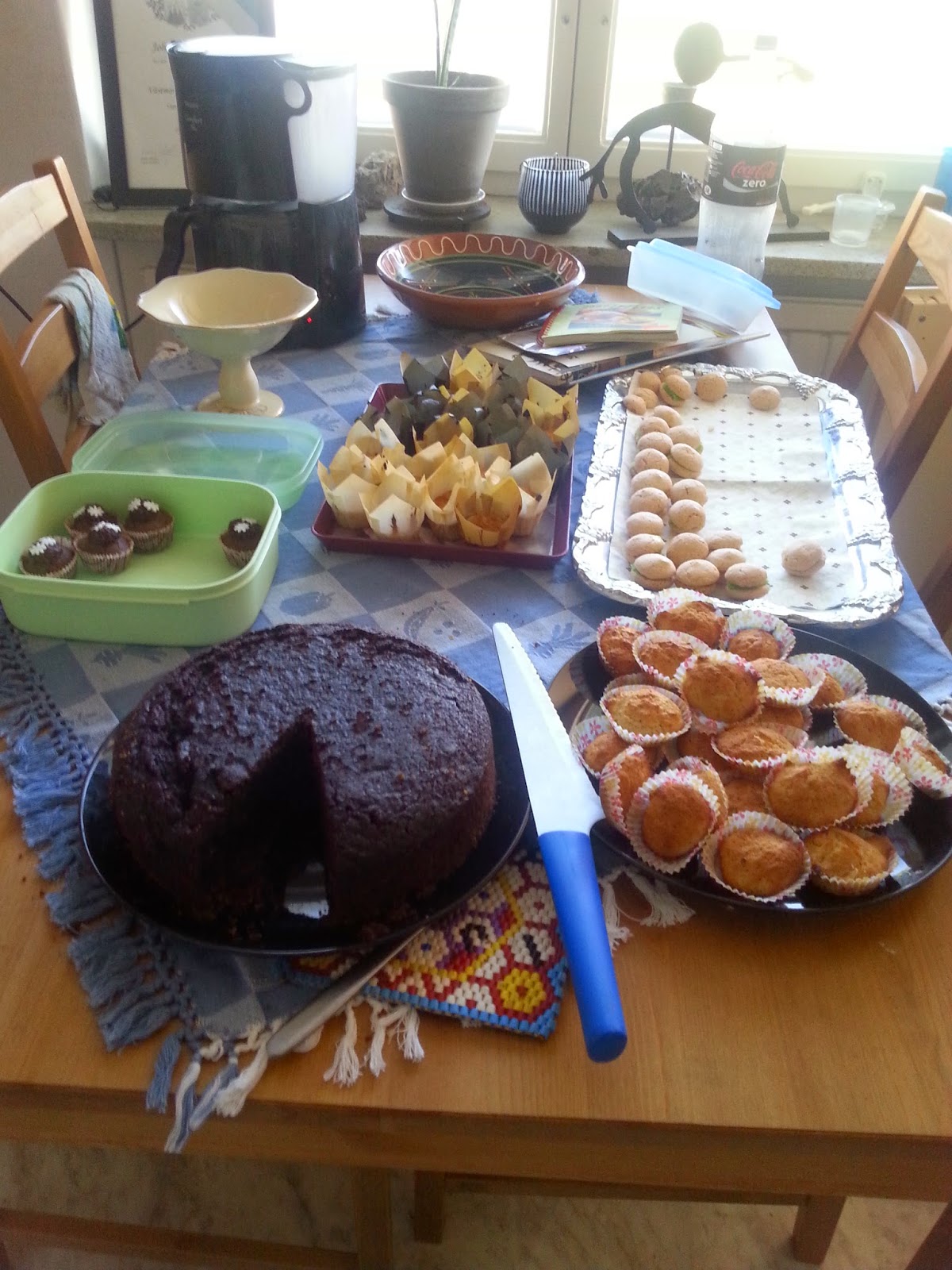 Posted by bandykullan at 18:15 No comments:

There are still some days left of September so I want to tell you about the September free e-book from Aarhus University.

It's Medieval Garments Reconstructed by Lilli Fransen, Anna Nørgård and Else Østergård, and basically it's a book that tells you everything you need to know about the finds from Herjolfsnes, Greenland. The finds were done when a cemetery from the Norse colony on Greenland was excavataed. The cold climate had preserved the clothes that people had been buried in, and it is one of the riches sources of medieval clothing, as worn by people in the North in the 14th century. The book contains both the history of the finds, analysis of everything from which kind of wool was use to spin the thread, the loom and not the least patterns on a grid scale. I also found it very nice that they have photos of the reconstructed garments, as well as the original one.

If you are the least interested in medieval clothing, or even just fantasy in a medieval setting, I definitely recommend to use this chance and get a free and legal copy of the book.

Medieval Garments Reconstructed
Posted by bandykullan at 20:21 No comments:

On Friday and Saturday I got the chance to use my new Endor Leia get up. It was a small troop and on Friday I had first planned to only go as Endor commando, but I was called Endor Leia anyway so I changed into that gear. The main troop was on Saturday. It was the "culture night" in Västerås, meaning that all over town there were a lot of cultural events where people could drop by. The Nordic Legions were asked by a company to provide a Star Wars theme. They had a cantina bar (with non-alcoholoic and great fresh smoothies) a games room, a question round, and we also provided blast-a-trooper. There were only four of us, and two Leias. Since the other Leia was the more recognisable classic ANH Leia she was inside, and I spent most of the time with a storm trooper on the street making people aware of that something was going on inside. Even if it was the stormtrooper that got most of the attention it was great standing around, and at least a couple of times I heard someone say "Princess Leia".

I also might finally have found a Star Wars costume that is really nice to wear. I've always felt conscsious about my size in the tightfitting pants and shirt, but with the poncho over I felt a lot better. I also changed the heavy and hot wig for the Endor helmet, and then it was no problem wearing it for a full evening, and not having to worry about the hair looking good was a great bonus. 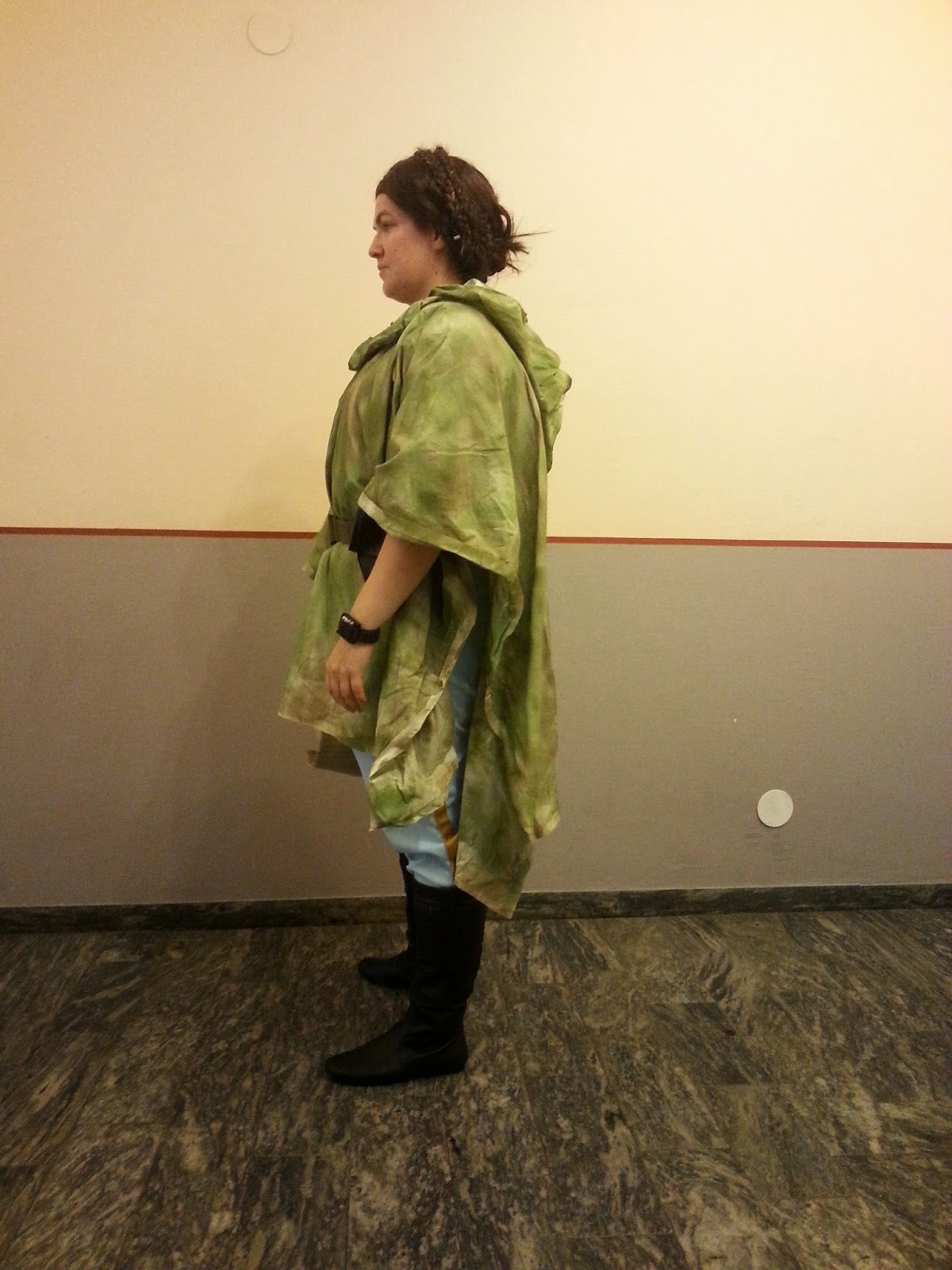 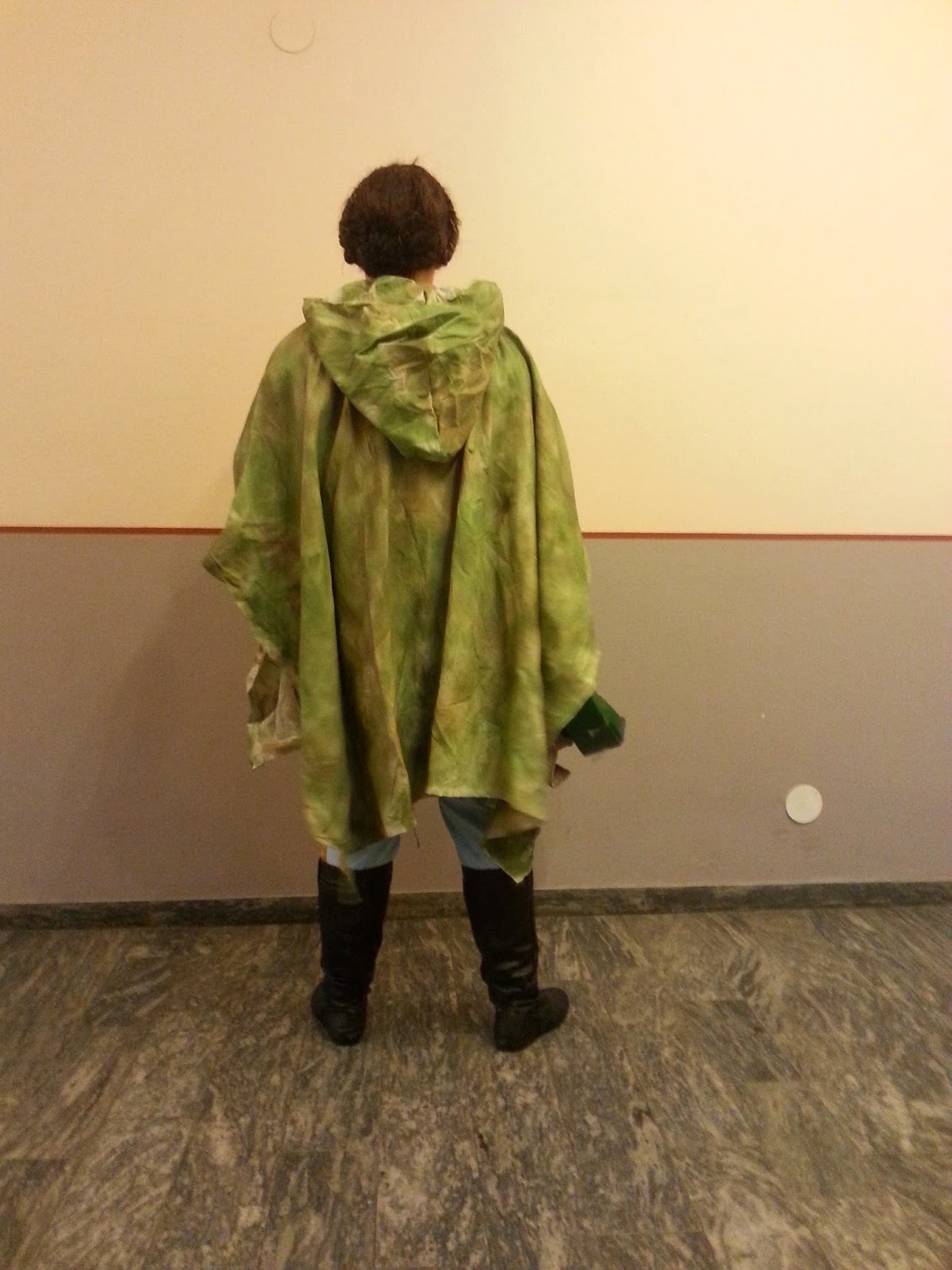 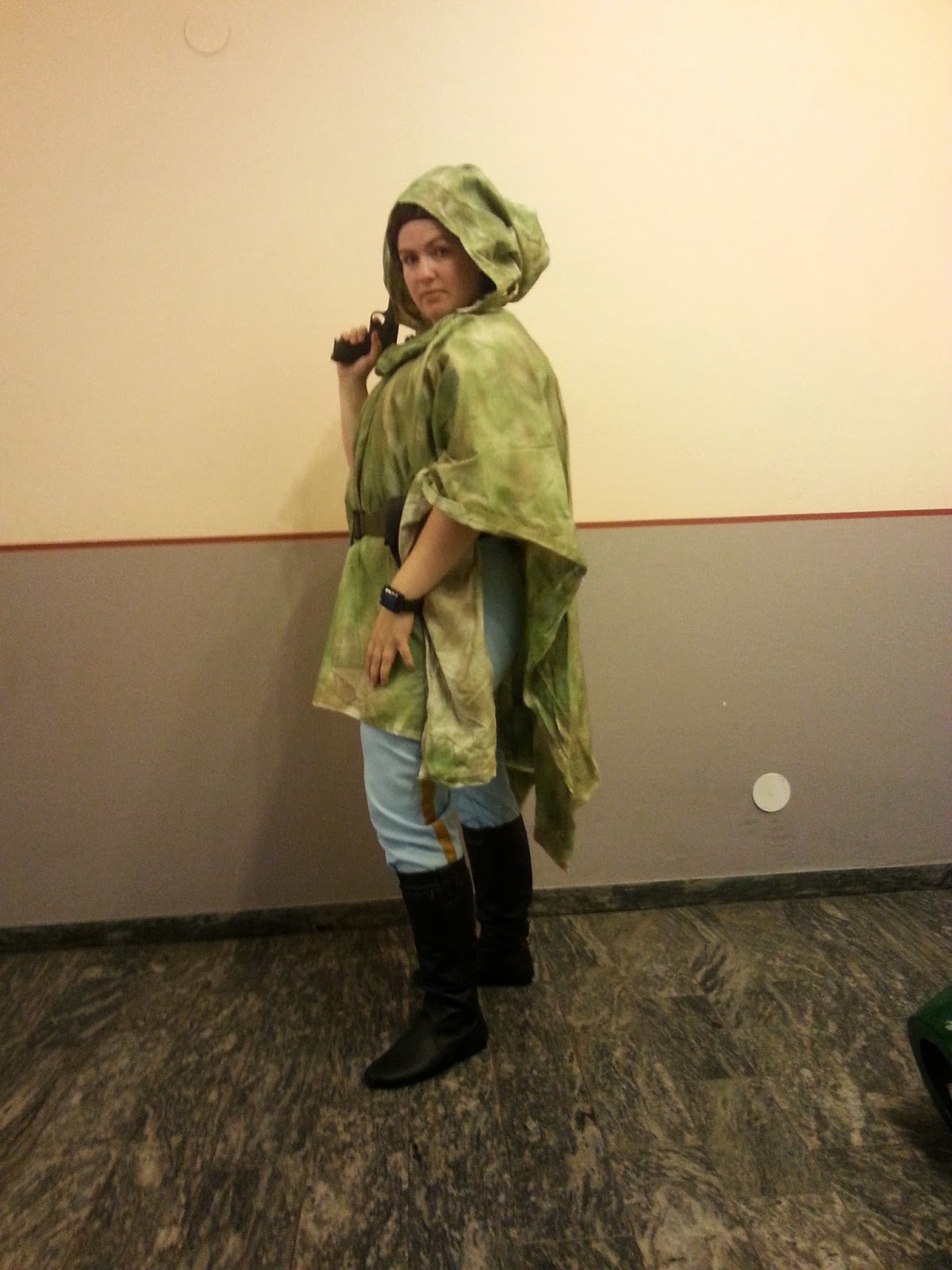 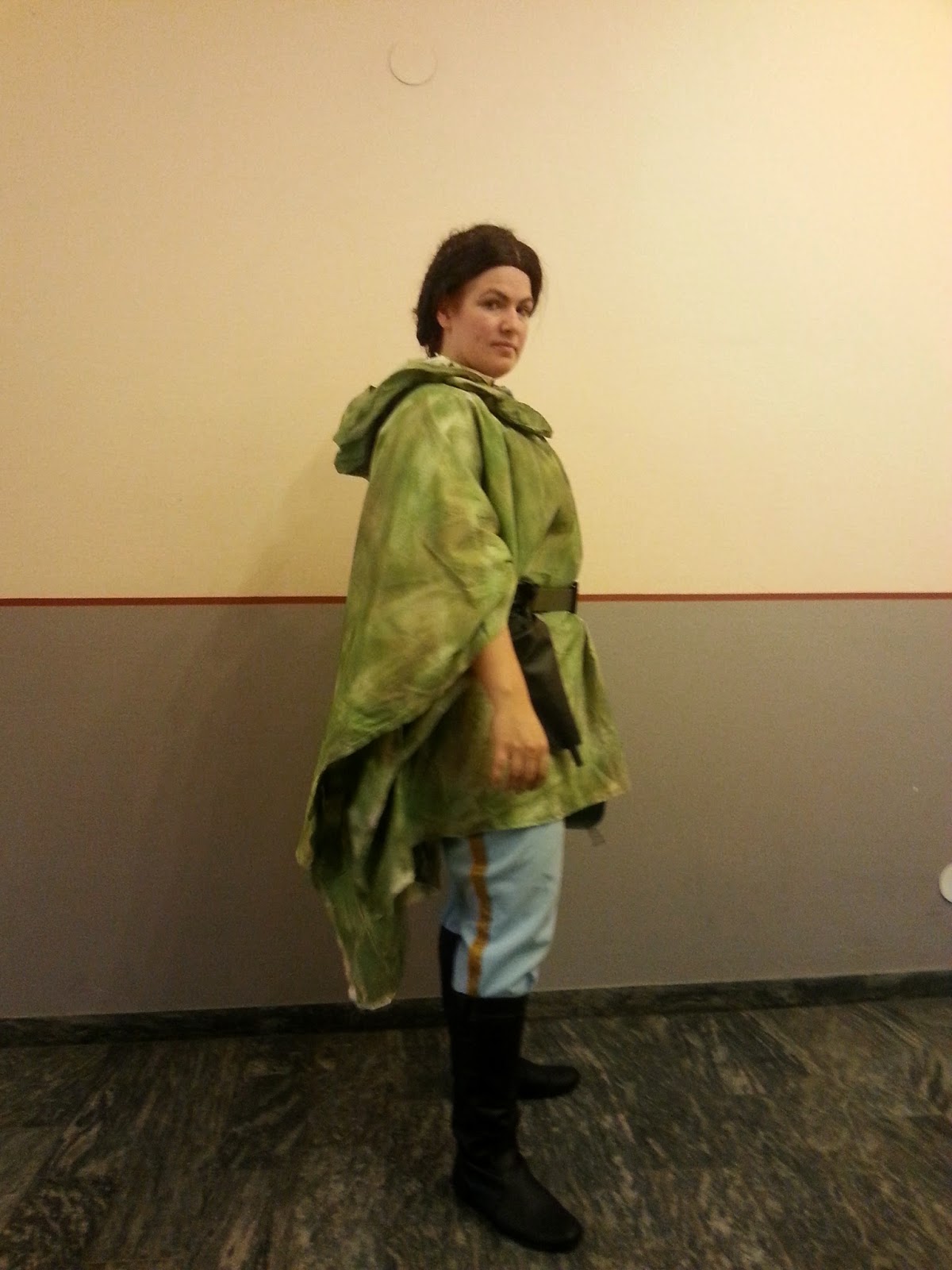 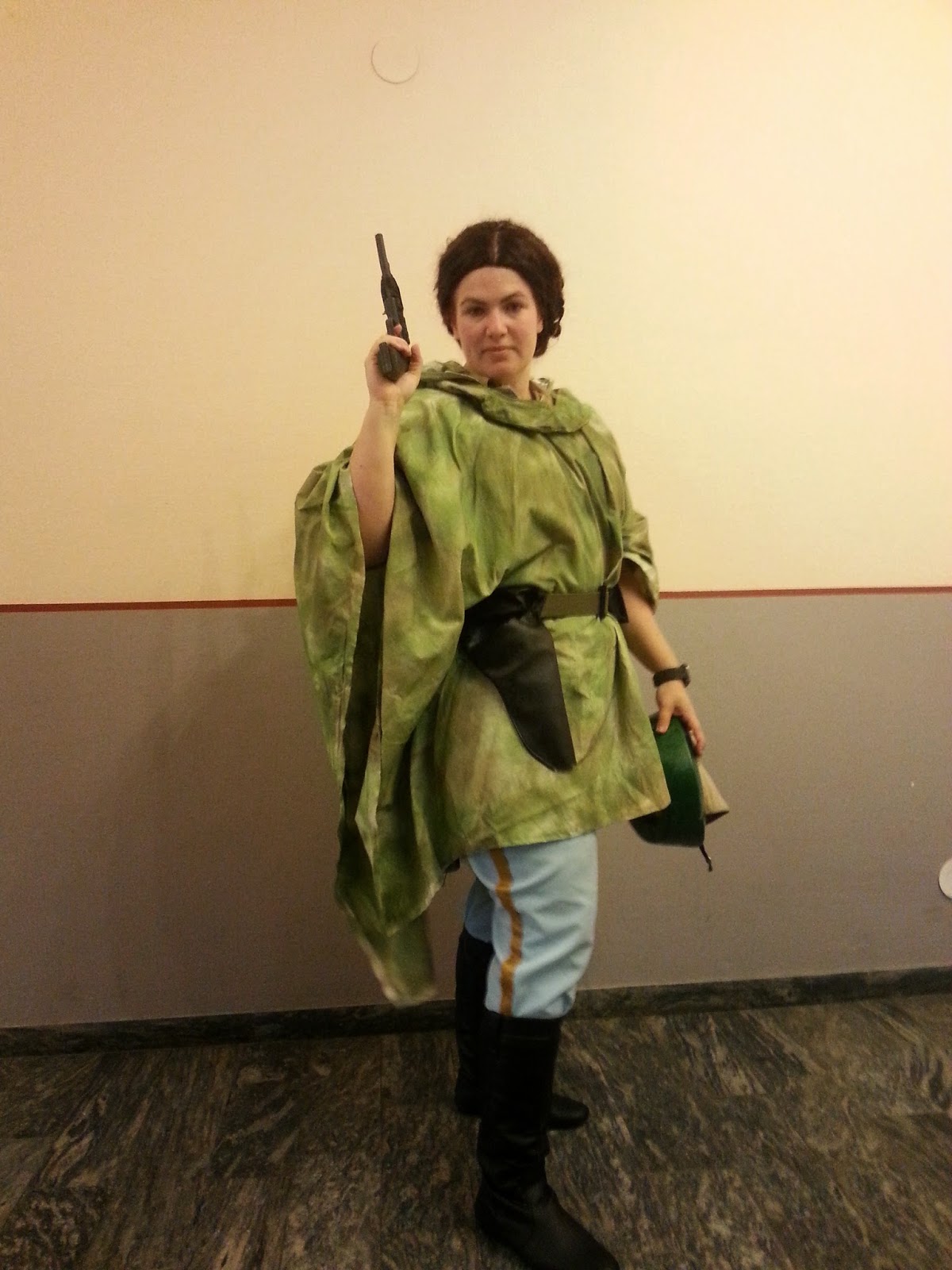 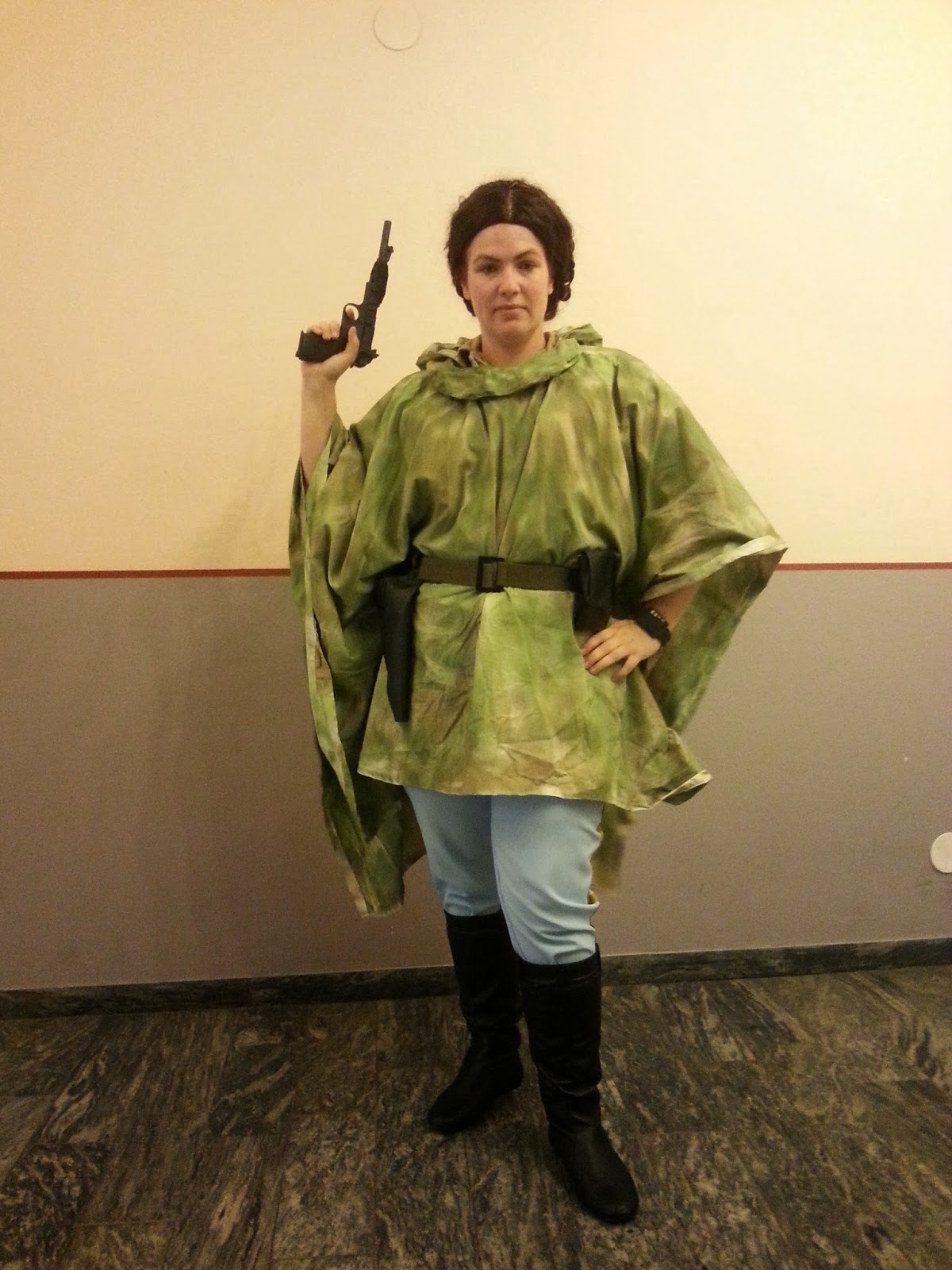 Posted by bandykullan at 16:05 No comments:

So the paints for my Endor poncho arrived today, so I got to painting it straight away. For the paints I used Fosco DDR green, Fosco Pale green, Fosco desert and Fosco Mud brown.

Now the paints stink and can get quite messy, so I didn't want to do it inside my flat. I went out into the parking lot outside my house and hung the poncho in a shrubbery. I got a few funny looks while I was working, especially from an older man..

The poncho has camo paint both on the inside and outside, so I started with turning it inside out and spray the inside. I first put on a base layer of the DDR green, then I added the Mud Brown, Desert and finally the Pale green over everything at the end. Then I turned it back and went over it in the same order. After the first layers I also put yet another layer of DDR green and more Pale green. I actually emptied both bottles of green, I would have liked to get even more paint on the inside and might add more in the future.

Then I went inside and now it's drying in my bathroom, with the fan there and in the kitchen going for full, but I can definitely feel the fumes. 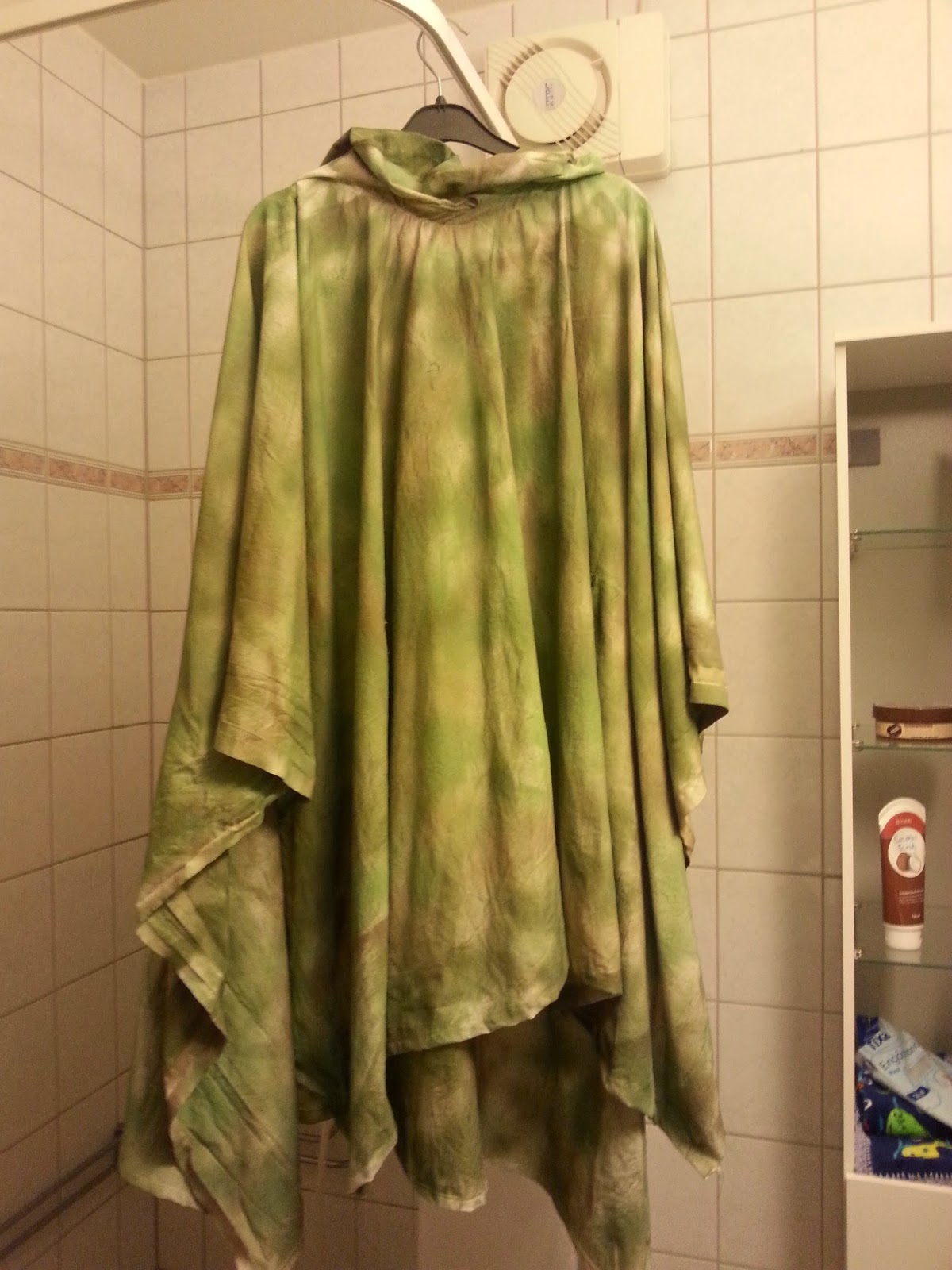 My advice if you want to do this is:'
Make sure to be in a well-ventilated area (outside is great)
Buy more paint than you think you need
Remember to buy paint removal, or wear gloves. I forgot and now my fingers have an interesting green colour even after a lot of scrubbing.
Posted by bandykullan at 20:04 No comments:

Since I've seen that this topic is one of the most viewed I would like to make a public announcement.
Since I got the Star Wars Original Trilogy Costume book I've come to the realisation that the construction described here is wrong. It works to get the right look, but the collar and hood are constructed as one piece, and not as separates. /Updated 2015

We take a break in Queen Elsa in order to make a quick, but well overdue, project.

When I made my Endor commando and Rebel Briefing Leia my plan was of course to also make the full Leia Endor battle outfit, the only thing missing after all was the poncho. Well that was almost two years ago now, but I've finally made the poncho, or at least the fabric start. It also helped that I have around 20 meters of a sturdy cotton that I need to get into more managable piecec, it's the table cloth from my sister's wedding.

Now making making a poncho, that shouldn't be too hard, but of course as always with costuming there are some hidden complications.

The base for the poncho was simple. I took the full width of the cotton, fold it over so it was longer in the back and shorter in front and cut a hole of the head.
The tricky part is the hood and collar. As you can see there is a kind of poofy, piece of fabric around the neck, but you can't see the hood. 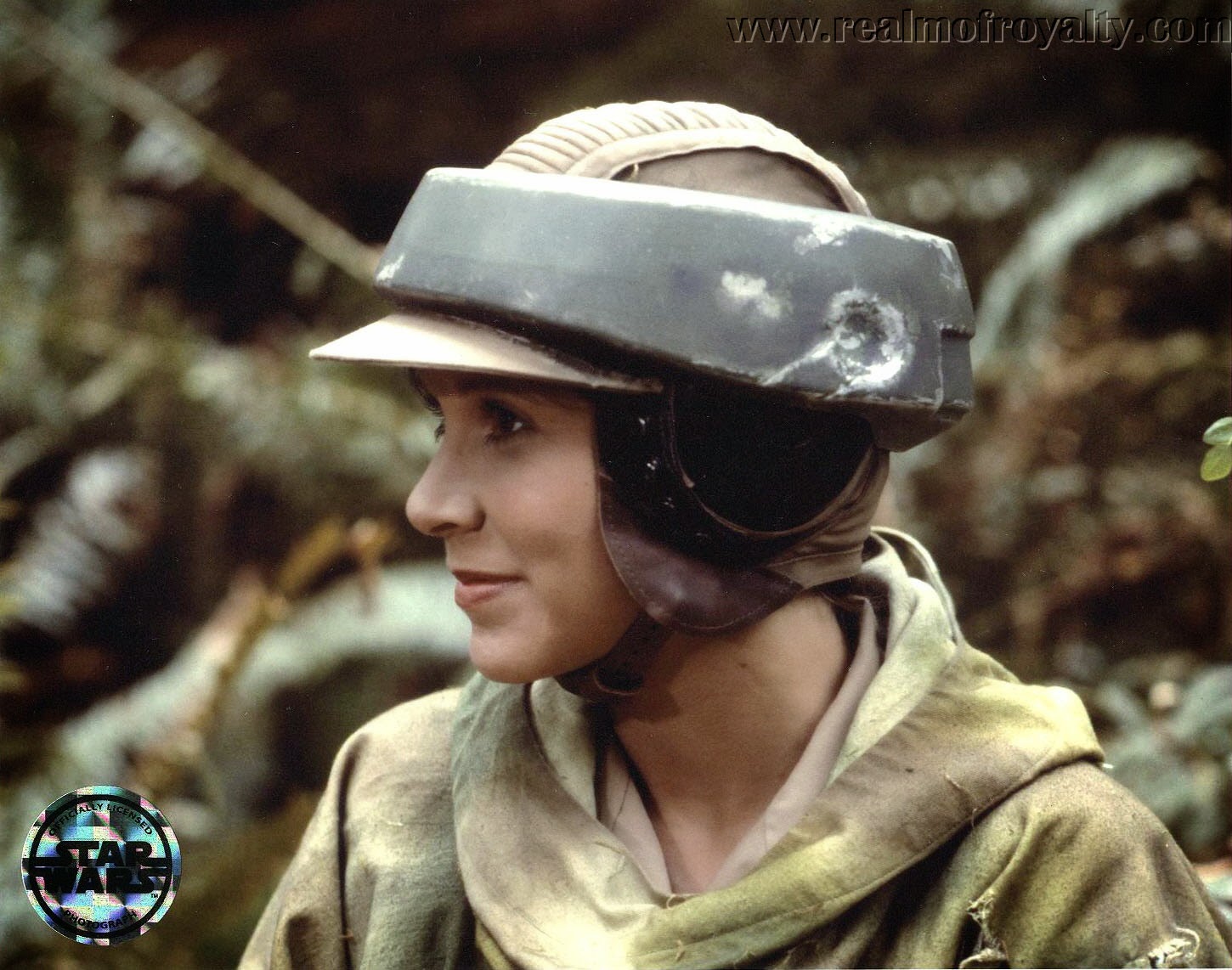 In this photo it's possible to see that the collar consists of two parts, there's a seam connecting the lower and upper part., the upper part is not attached to the neck opening, and you can't really see the hood. 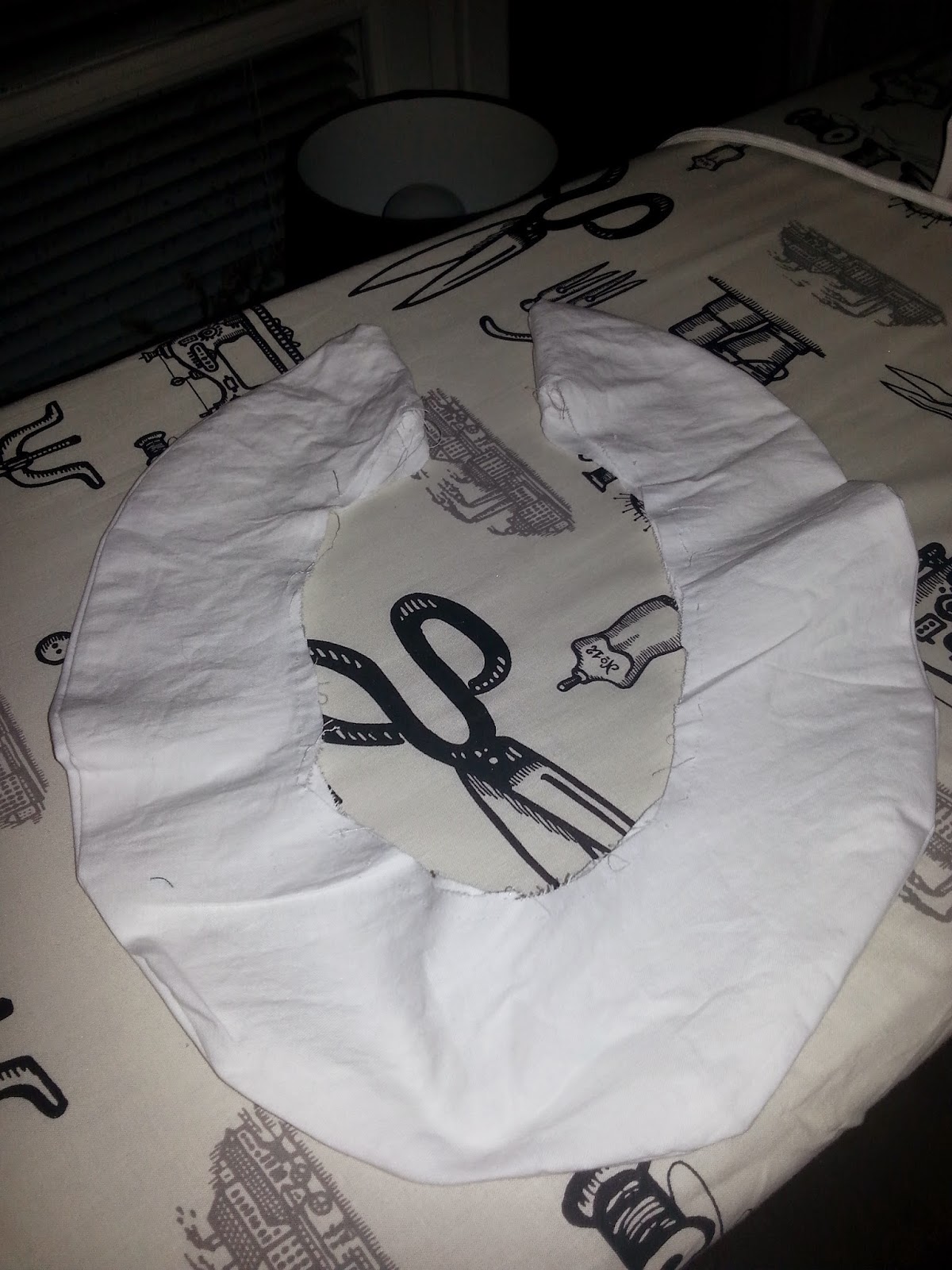 I made the collar the same way I do a circle skirt, so it consists of two layers, and upper and lower circle, and they are sewn together at the outside.

The hood took me some trial and error, I simply made it too small at first. Here is a comparison with my first and second version of the hood. 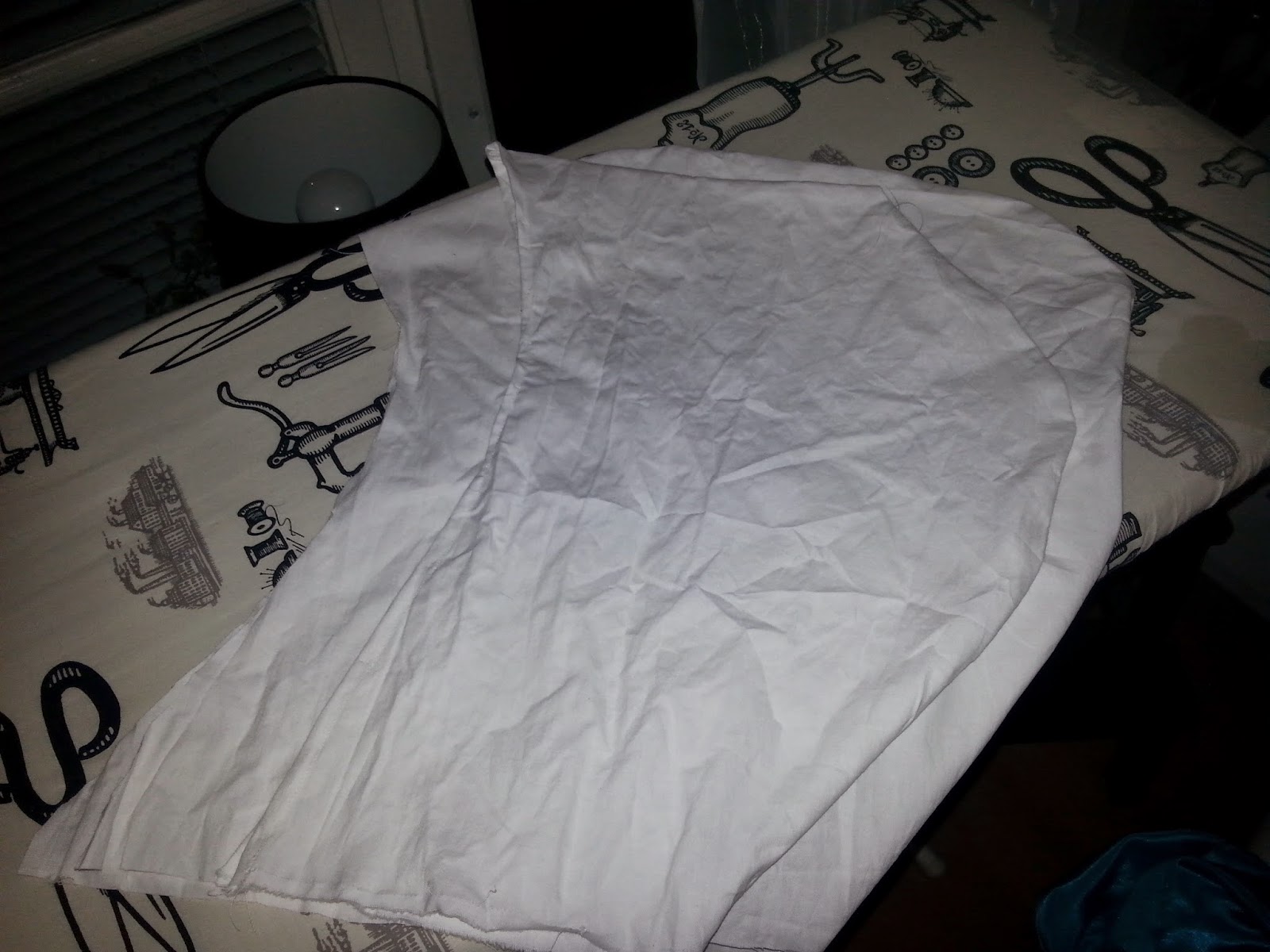 Since the hood is always going to be worn hanging down the back I flatfelled the center seam to make it look good and don't show any raw edges. 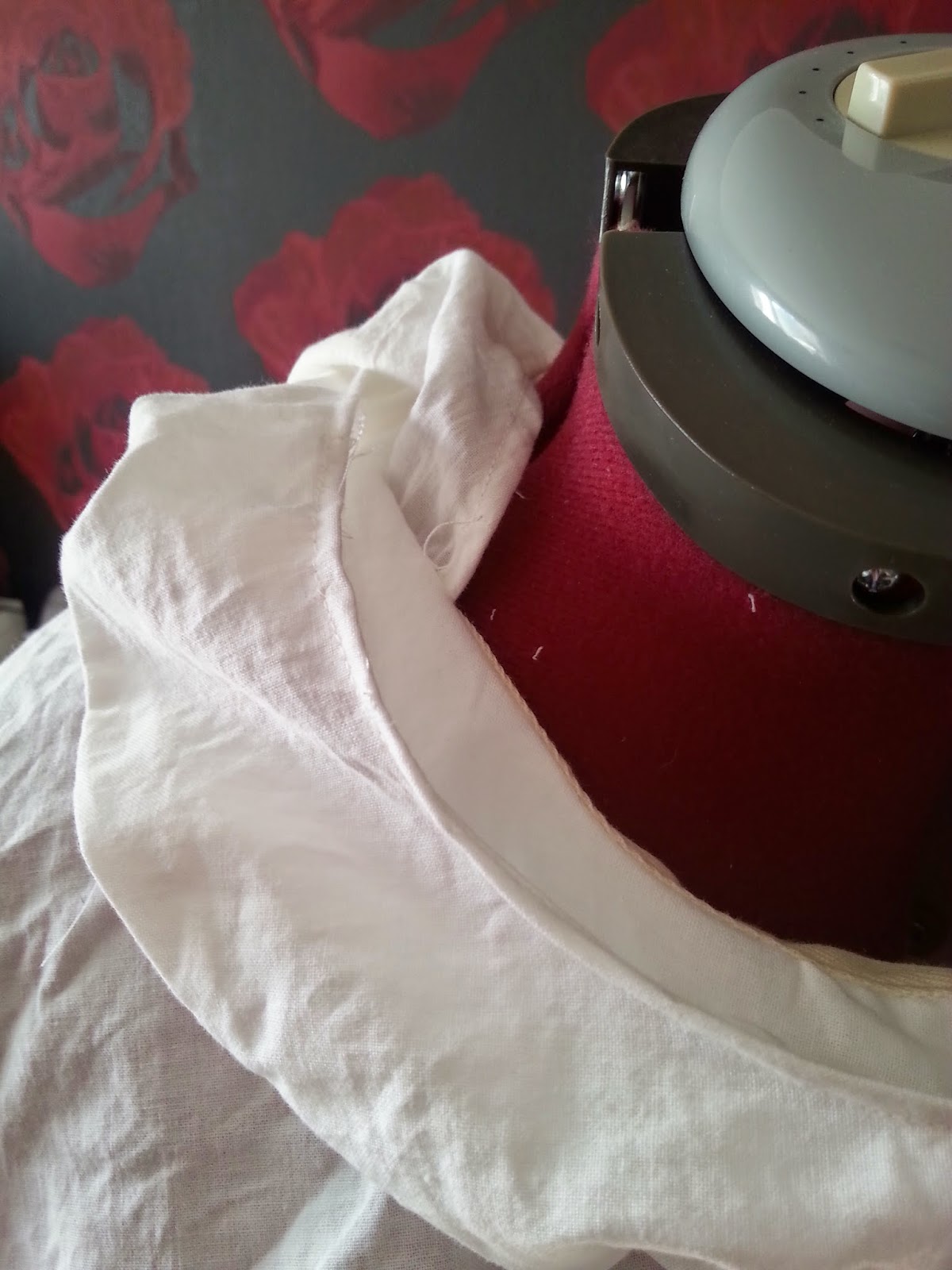 In order to reinforce the the opening I sewed a piece of cotton tape to the opening, and hid all the raw edges under the tape. 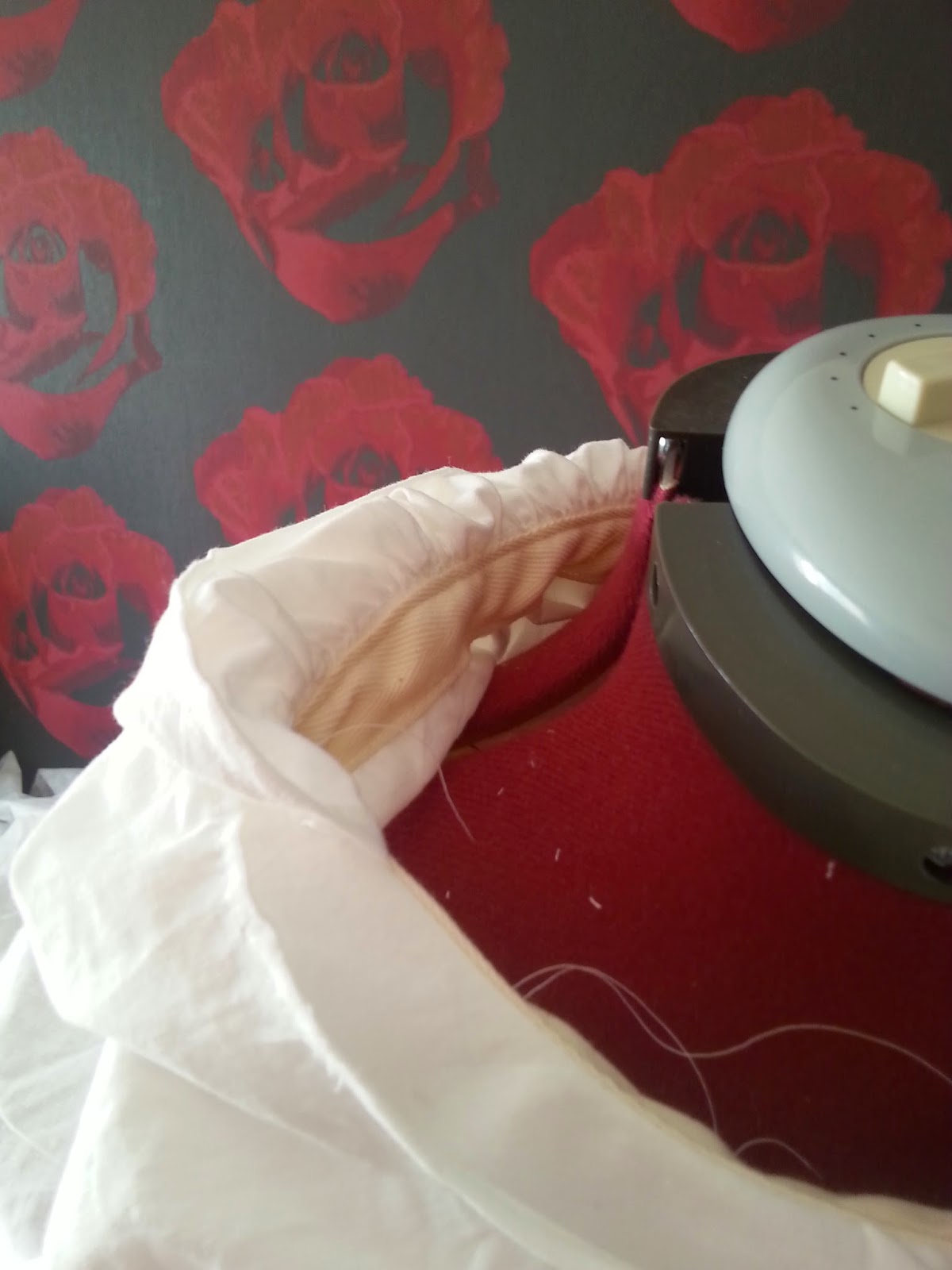 The last thing was to make two slits in the front, that I can put the belt through, the front is belted, but the back is left to hang free. 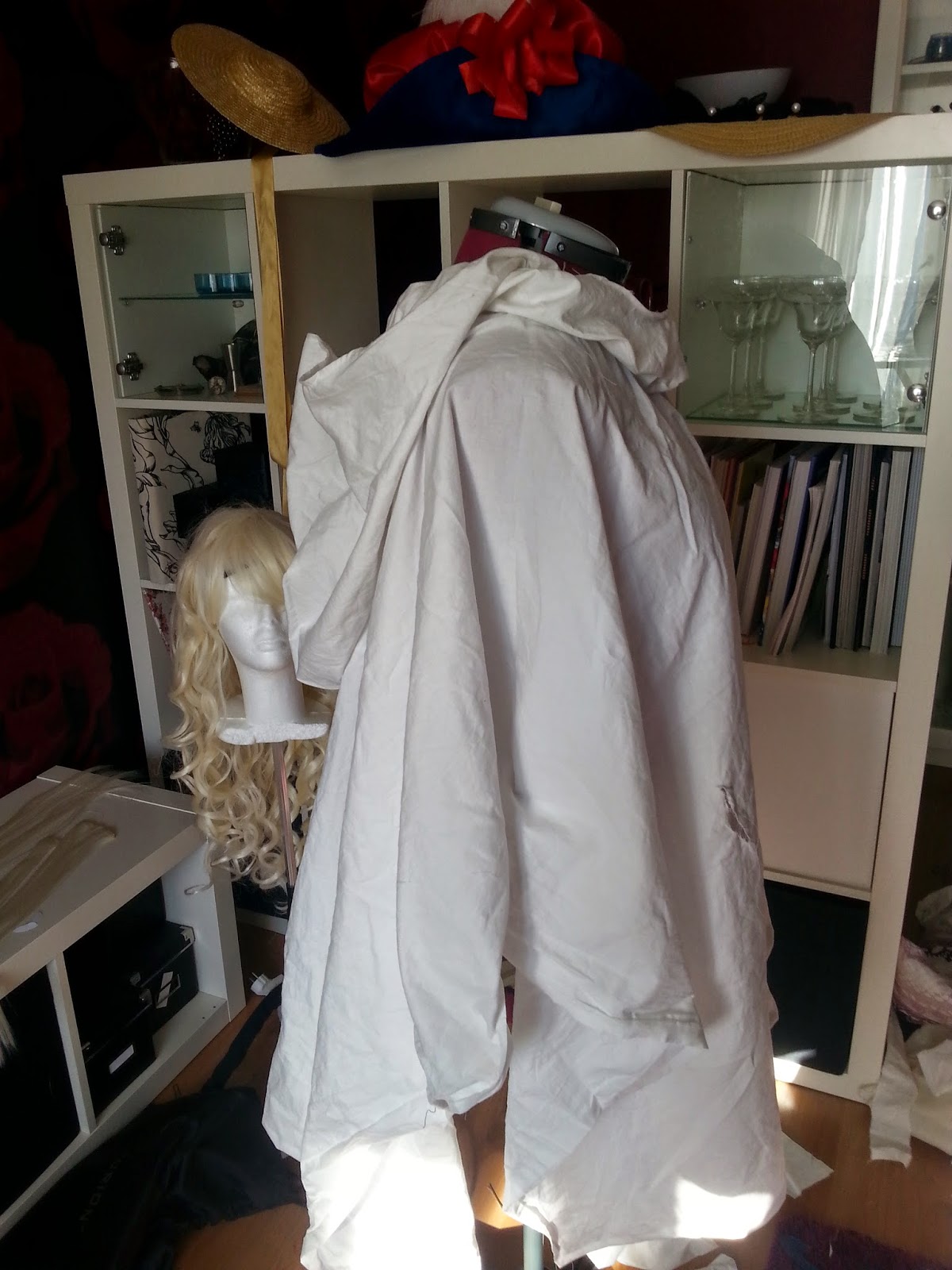 This is the final result. As you realise though, it's white, and not in camo colours. Unlike the Endor Commandos the heroes' camo outfits were painted on a white background fabric, the commandos have tan/beige background fabrics. At this time I went up to get my remaining paints from the Endor commando costume, only to realise that it's not enough paint left. I have ordered new paints though.

There is an event this weekend that I'd love to be able to wear the poncho for, but it all depends on if the paints get here in time, with luck they'll arrive on Wednesday and then I can paint the, let it dry until Thursday so that I can pack on Friday morning.
Posted by bandykullan at 10:54 1 comment:

Tonight I took advantage of the Austria-Sweden football game and managed to finish the first motif. I'm glad that I've started with the motifs in the back, since I'm definitely improving my needle skills step by step. 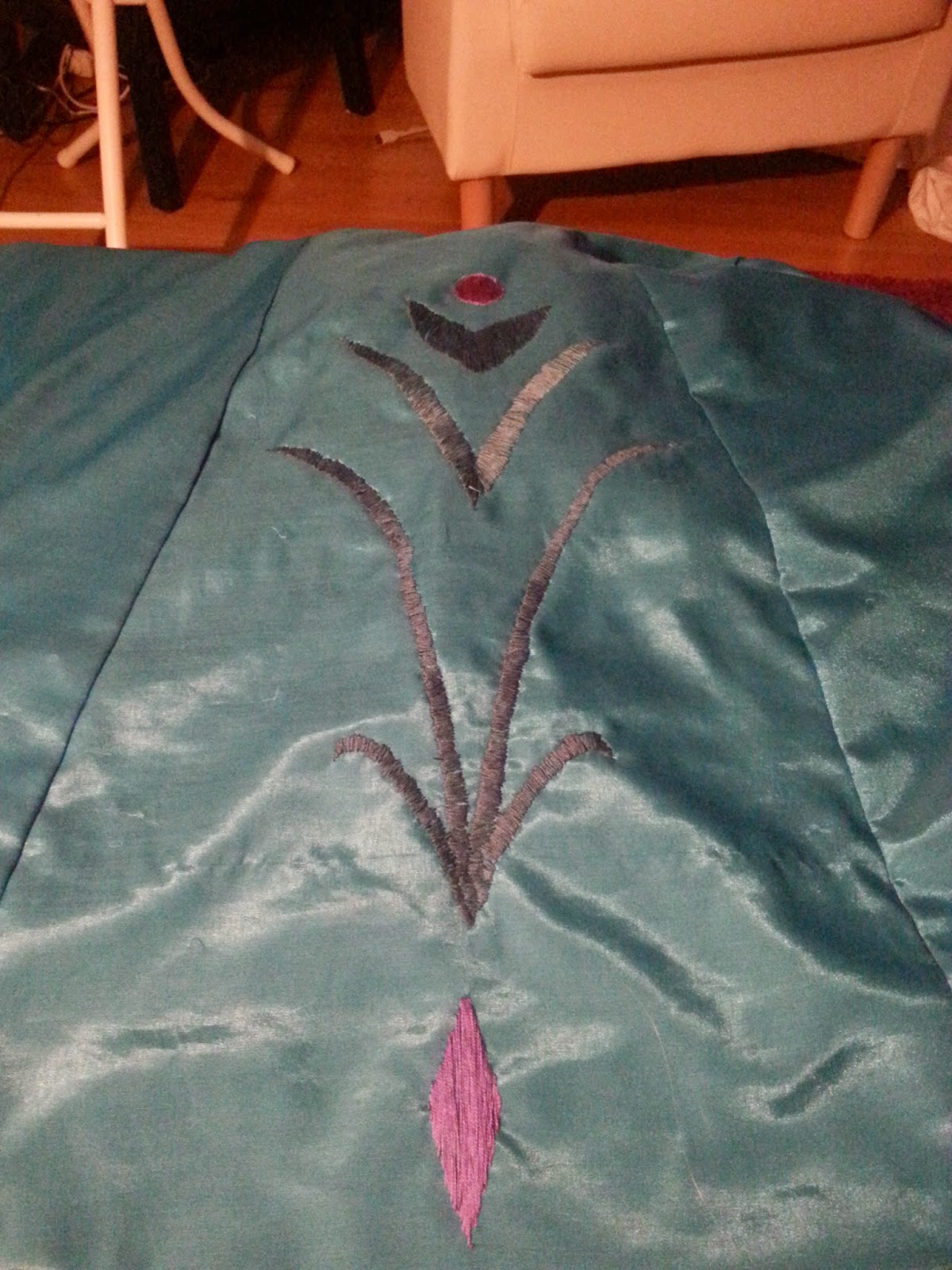 There is still room for a roundel between the bottom and top leaves, but I can't really decide if it's there or not in the screen caps. In the concept sketch it's definitely there though. I think I'm going to finish the rest before deciding if the I should add it or not.
Posted by bandykullan at 23:18 No comments:

Today I have started to embroider the skirt of Elsa's coronation gown. To be honest I think that painting the motifs on is probably more screen accurate, but I want to bring this costume closer to the traditional Norwegian bunad, which is so clearly the inspiration of the fashion in Frozen. One of the real distinguishing things with the bunad is the heavy embroideries, embroidery it is for me.
Elsa's skirt isn't as heavily embroidered,but the decorations go all around the skirt,and ends just below the knee. Now I can't take credit for creating the template for the motifs, I mostly used the ones created by Andrea Schewe. I felt that they were a bit too squashed and not as sleek as the original though. What I did was to print out two copies, one on an A4 paper and one on an A3. From those two prints I took a couple of measure points and then more or less freehanded my version of the tall motif. I haven't done the rounded lower motifyet.

In order to transfer the motif to the fabric I cut out all the parts of the motifs and placed them on the wrong side of the fabric. One very good thing with flatlining the outer fabric to a natural cotton is that it's easy to draw on it. I placed all the pieces of the motifon the skirt and then traced them with pencil.

I then marked the outer lines of the motifs with the same thread I'm going to use for the embroidery, doing simple up an down stitches.

Then when I turn to the right side of the fabric I now have a visible line that's easy to follow. I'm using DMC 3808 for the darker parts, I haven't decided on exactly which colours to use for the rest of the embroidery yet. 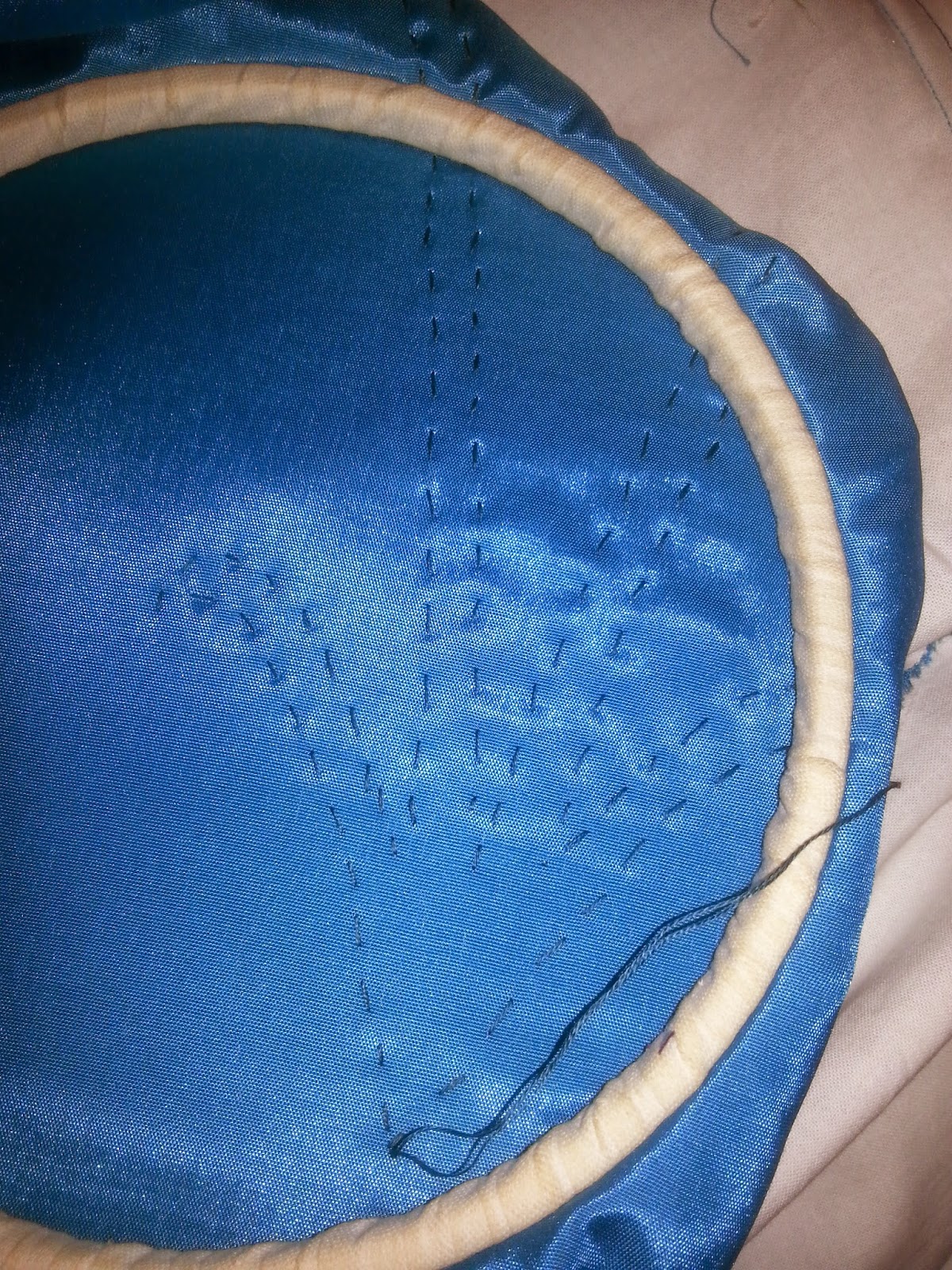 Now I only need to start filling in the motifs, and then there are seven more tall motifs, and all the lower ones left.
Posted by bandykullan at 23:04 No comments: