Today the weather was warm, but cloudy and windy, and I decided to take advantage of being at my mum's with access to a garden.

I wanted to dye my 1520's undergown. The fabric dyes that I had at home were Dylon Terracotta brown,  Goldfish orange and Sundlower yellow. I had a third of a packet of the brown and orange and hoped it would make some kind of golden brown. I was wrong. As soon as I put the dress in the dye bath it was obvious that the orange totally overpowered the brown. To dampen rhe bright orange I added all the yellow that I had, 1,3 packages. That was all the dye I had, so I would have to live with the result.

Another thing was of course that the gown is made out of wool. It says on the package that wool will take a lighter shade than cotton or linen but while I was stirring the gown in the dye bath it looked like it didn't take any dye at all. 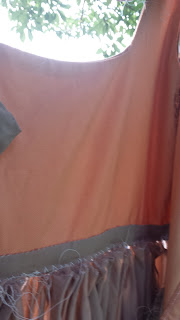 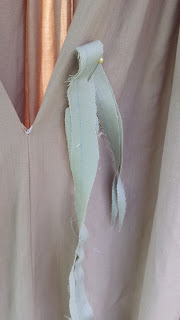 Still when I compare the dyed gown with the original fabric there is a clear difference. 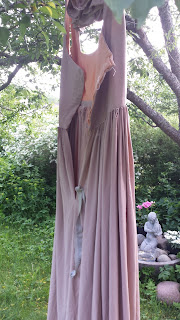 Even if I didn't get a nice golden brown gown it has taken on a warmer and more earthy shade. I think it looks better than before the dye. But be wary if you are planning on using the Dylon Goldfish orange, it's really strong.

Posted by bandykullan at 19:28 No comments:

Another take on Vintage Amidala

Back at Star Wars Celebration in Orlando I wore my vintage Amidala outfit paired with a pair of black trousers. I didn't get any photos of that though. Today I wore the same outfit, and I did get some photos. 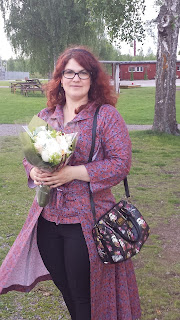 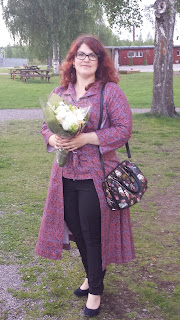 I actually prefer the look with the trousers, rather than with the blue dress under it. I also paired it with my gold Naboo earrings and Loungefly SW handbag. This is the kind of fandom fashion that I love. Nobody made any comments about me being dressed up or wearing SW stuff. Instead I blended it with my usual style of clothing. Ok, the long coat style is a bit over the top for everyday wear, but today was the opening of our new museum after three years of work so I wanted to be dressed up.

The downside is that the fabric from spoonflower, it's their cotton sateen, is already showing some wear. Some creases in the fabric have gotten permanent white lines where the print has faded, and overall I feel as if the colours are already a bit faded compared to when I got the fabric. This is not a problem that I have experienced with my Greedo dress, that's from a spoonflower jersey fabric, so it might be that the cotton sateen is a bit more sensitive. I'm going to be very carefull when I wash it in the future, and iron it immediately so it doesn't develope any new creases.

Posted by bandykullan at 20:37 No comments:

When I finished my pet en l'air I felt that it was soooooo frilly and froofy, and that I needed a cap to go with it. The caps that I have were either way to late, like my 1780's cap that need a giant hedgehog hairstyle, or more prim and proper and mostly made to hide the hair.

I looked around for other styles of caps. La Coutourière Parisienne has a great overview of different styles of caps for the 18th Century. I also found this and a similar extant cap.


These kinds of caps were mostly popular around France, and around the 1750's, so a bit earlier than my aimed for 1760's, but not too far off. I definitely liked the style though so I decided to make one. I didn't have any nice lace, but I did have around half a meter of fine linen.

I started out with cutting out a half circle of the linen. 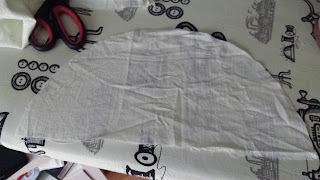 I tried the general shape on my wig head to see what it would look like. 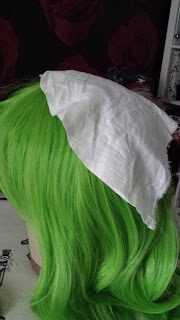 Yes, the green wig is an upcoming Project. I felt that it went too far down on the sides though, so I cut off the sides so that it looked more like a half oval in shape. 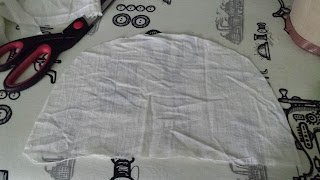 This felt much better when I tried it on the wig head again.

I then cut out three strips of the linen to make the ruffle and bands that hang down. 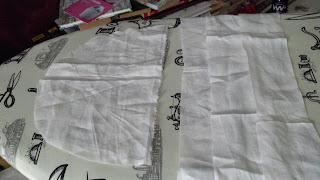 The strips were joined together to make one long band, and all the sides of the band and the main cap were hemmed with a rolled hem. For the straight side of the cap I folded the edge over to make a channel that I could put a ribbon through to adjust it. 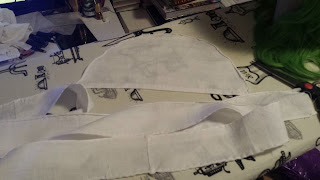 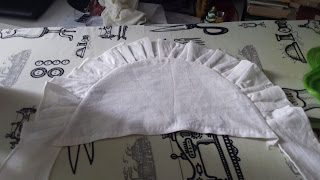 I treaded a ribbon through the straight edge of the cap, so that I could adjust the size. I didn't do it the most correct way though. Then you attach a ribbon to each side of the edge, and have them meet in the middle so that you can tie them together in an opening in the channel. 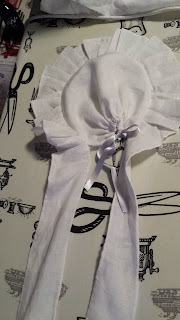 On the inside of the cap I attached Three small loops of ribbons so that I could attach a bobby pin in each, to secure the cap on my hair. 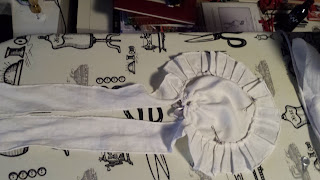 And this is me wearing the finished cap. It stayed on the whole day, even if it was quite windy at times. 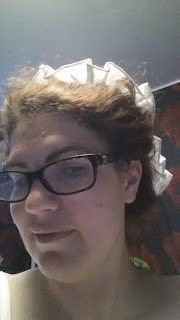 Posted by bandykullan at 09:00 No comments:

Pet en l'air in the park

Today it's Sweden's national day, which most Sweden don't care much about, it's a holiday though. The last few years there has been a gathering of people in Historical clothes in Stockholm, I was able to get there last year but not this year. Inspired by that Cosplay Dalarna decided to have a cosplay picknick, where people were welcome to come in anything, and sit in the grass and chat. I of course decided to go with my newly finished pet en l'air. 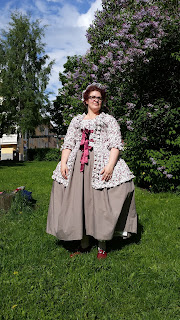 It was also the first time I wore my pocket hoops and the petticoat that I made this Winter. In contrast the skirt is actually part of my first ever 18th century outfit. After that first time I have only worn later 18th century clothes, with a bumpad instead of pocket hoops, but it was geat to be able to put it to use again, and that it fit over my new hoops. 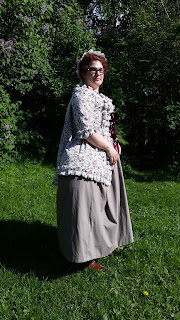 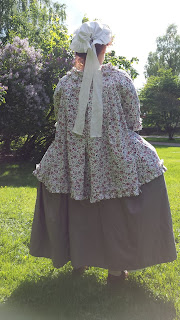 Before I wear the pet en l'air the next time I will probably add another pair of ribbons above the ones that are already there.

There were some sad things though with getting dressed. My bad shoulder unfortunately made it impossible to do anything fancy with my hair. I simply can't lift it high enough to work with my hair. I had planned to do a nice tete de mouton hairstyle, but I just couldn't. All I could do was to simply tease my curled hair a bit and pull it up. It was also very hard to get dressed, and it hurt quite a lot at a couple of times when I tried to reach for the ribbons that hold it all together. It's said but I definitely need to take this injury into consideration for my costumes in the future, and try to find easier ways of getting dressed.

The picknick itself was nice, three of us had dressed up. Me in 18th Century, Tom in some LARP-clothing and Linus in cosplay. There were also a couple of other people who showed up, so nice and easy.

As you might see I also had a new cap on, and a post about that should come in the next few Days.

Posted by bandykullan at 22:29 No comments:

or what a difference some trim makes.

After I had finished the main part of the pet en l'air I started to think about how to close it and trim it. 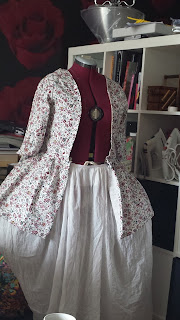 I'm still hoping to loose some weight, so I wanted to make a closure that can easily be adjusted. So I decided to use ribbon bows, with a stomacher under it. 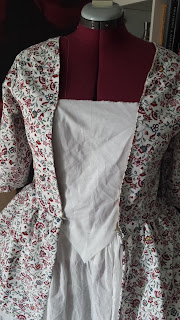 For the stomacher I simply statrted with pinning a piece of scrap fabric in the gap and cutting it into a nice shape. I realized that such a Sharp point would be tricky to look nice, so I made it more rounded. 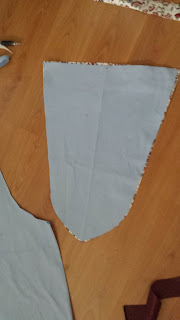 I cut the stomacher in two layers of fabric. The underlayer is a sturdy old tablecloth in some kind of linen blend, and then the outer fabric is the same as the main jacket. I folded the edges toward each other and sewed them together. The stomacher has no boning and is made to be pinned to the jacket. 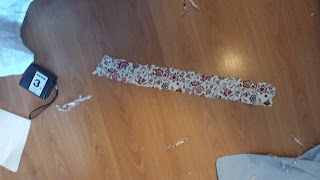 I also sewed three pairs of ribbon on under the trim. There are no robings on the pet, but the trim acts as robings to hide where I've attached the ribbons and will pin the stomacher. One reason why I didn't do robings is because the fabric is so thick. It's close to an upholstery fabric, and I felt that it was better to go for trim than robings. And then the pet en l'air was finally finished. 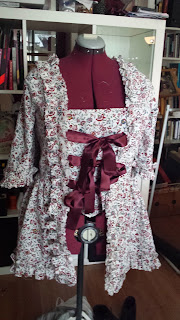 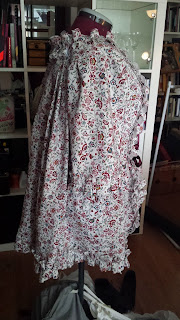 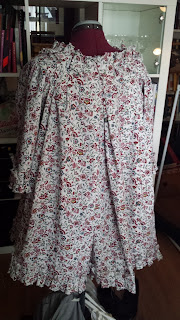 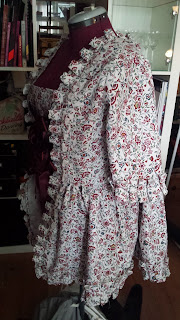 I love how the trim turned the pet en l'air into quite and frothy little cupcake. It was well worth the work of putting it on.
Posted by bandykullan at 10:52 No comments: