The belt for Enfys Nest was a lot easier than the shoes. I decided to do it from a scrap piece of white faux leather that I already had, rather than buying new real leather. I think the faux leather is from when I made my classic ANH Leia. I had to be a bit careful, since I don't have a lot of faux leather and it will be used for the chest box assembly as well. 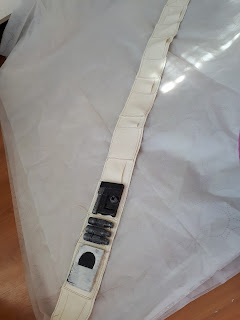 This is the belt in its unweathered state. I had to piece two straps together, both for the main piece and for the thinner middle strap. The joints are hidden under two of the smaller squares. The squares are good since they help stabilize the whole belt. A downside with fake leather is of course that it's a lot thinner and flimsier than proper leather, on the other hand it's a lot easier to sew it on a sewing machine. I had thought about adding a backing layer, but I felt that the belt is probably sturdy enough without the backing, but it won't be able to hold any weights.

The greeblies are 3d printed by friends from the files made by bh1138 and available on Thingiverse. They are clued on with contact glue, but I am thinking about maybe securing the connector beads with some invisible thread as well.

The belt closes with velcro, the stitching for securing the velcro pieces is hidden under the thinner strap. 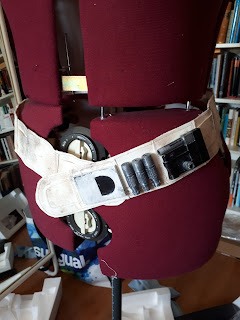 For the weathering I used acrylic paints in pastel brown and ivory black. I added some paints and then quickly remove them with a paper towel, that also removes all the brush strokes.
Posted by bandykullan at 12:19 No comments:

My Enfys Nest has really hit a lot of speedbumps. First of all my helmet is not going to arrive before Celebration. It will make it a lot easier to pack, but the helmet is the coolest part of the costume and even if I wear a ginger wig it won't be the same. I ordered the arm fan shields, since I felt that it was a bit out of my league to make a pair that could fold in and out. That package has been stuck at a FedEx facility for the last two weeks with the tracking info only saying "shipment delay beyond our control". Today the tracking has changed to "in transit" and I can only hope that means that it's actually moving. Still getting it across the Atlantic, through Swedish customs and to my adress in two weeks is unlikely. I have a glimmer of hope, due to the change in the shipping status, but I must be realistic. The third thing that hasn't arrived are the hairpin beads for the breastplate decorations. Apparently hairpin beads are very common in the US, but not in Europe. I found a shop in the UK, but they are also delayed. As it is now I'm starting to feel that I will go to Celebration with an unfinished costume and I will have to save the proper presentation for NärCon or  Stockholm ComicCon later in the year.


At least I have finished the shoes and here is my step by step on how I made them. 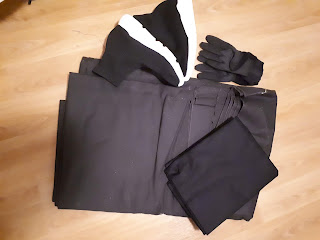 I started out with a pair of fairly cheap pull on sneakers. The important thing was to get the big chunky sole. I also wanted a pair of pull on, so I wouldn't have to worry about lacing the shoes or making sure that they would stay on my foot in other ways. 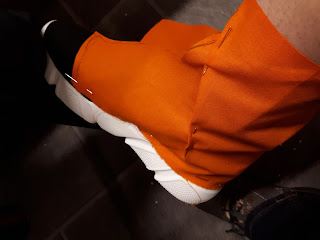 I then covered the shoes in pieces of scrap fabric until I felt that they covered the shoe the way I wanted. I'm not showing you what the pattern looked like, since I was not happy with it. If I remake the shoes I would go about it differently. 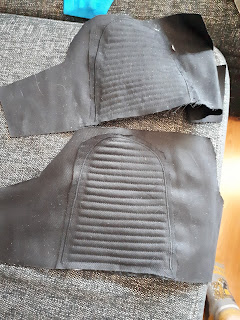 I used the orange fabric as a guide and cut out the main fabric. To get the quilted back I sandwiched a layer of wadding between the two pieces of fabric and quilted it down. I made a satin stitch border along the quilted piece. 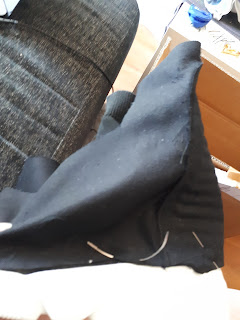 I used a curved needle to sew the outer fabric to the shoe. This really hurt my fingers and it's not a seam that I'm really proud of, but the fabric shell is attached to the shoe well enough. 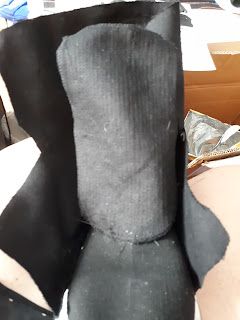 The tongue was also quilted, but instead of wadding I used a piece of thin felt. I thougth the wadding would have been too clunky, but in hindsight the felt was too thin and I shoud probably have used the wadding. It was sewn on the the shoe by hand as well. 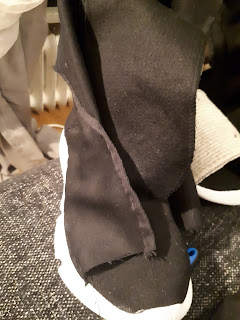 I covered the edge of the opening with some cotton tape. 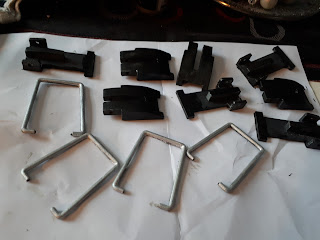 Then it was time to sand and paint the buckles that a friend had helped me to 3D-print. The link to the model is here. 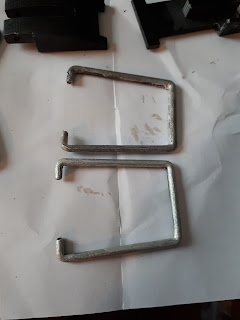 '
I started with painting all the pieces silver. The buckles were then painted with ivory black in thin layers to let the silver shine through a bit. The clasps were painted with grey, but with the same brush that I had used with the ivory black. Above you can see the difference between the silver at the bottom and the dulled down on the top. I'm really happy with the rusty look. I can really recommend working with ivory black if you want something to look old and rusty. It has a lot of brown in it which gives a really dirty and rusty feeling to the colour, compared to pure black. 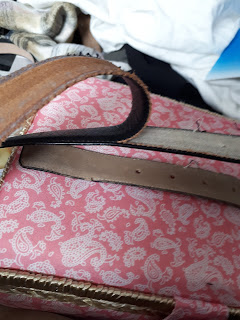 The leather for the buckle straps came from an old belt that I bought at an op shop. I took away the backing of the belt to make it softer and easier to use. 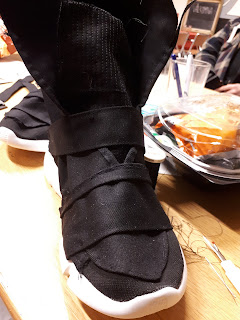 I played around with placement and look of the straps, and then I attached the rounded front piece, the main piece that goes over the foot and the bottom fabric strap by sewing them permanently to the shoe. I glued the buckle, with the leather strap, on to the bottom fabric strap. I made sure to test that I could take the shoe on and off without having to adjust that strap before I glued the buckle on. I used contact glue. 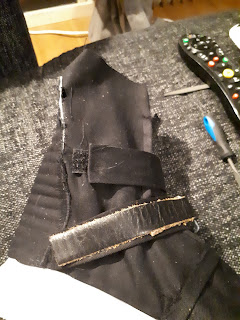 The top strap needs to be functional, so that I can open it to get my foot into the shoe. I sewed a piece of velcro to the end of the strap that goes on the inside of the foot. Then I glued the buckle and the leather strap on to the fabric strap. The leather strap and buckle have no function at all since I don't want to strain the plastic buckle at all. 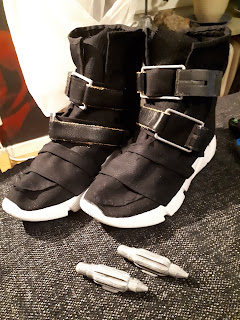 I cut off the top of the boots so I got the height that I wanted and painted the rockets. The rockets are also painted with silver, grey and some ivory black. The rockets were found and bought on etsy. Now comes the part that I really like, the weathering. 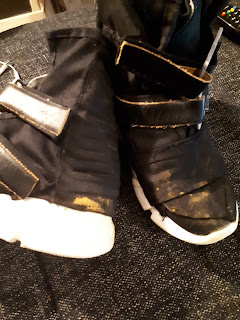 I started with taking the shoes to work and and wear them for a full day. They are discrete enough when the buckles are hidden under my work trousers. The dirt at work is too brown though to get the kind of weathering that Enfys Nest has. I brushed off most of the dirt, but that helped to make the fabric look a bit worn, and the dirt had also really dampened the bright white of the soles. The dirt marks were also good for guiding me when I started to go over the books with mainly grey acrylic paint. The paint was watered down and dry brushed on.

The finishing touches were to glue on the rockets with contact glue and darken the edges of the leather straps with more ivory black. 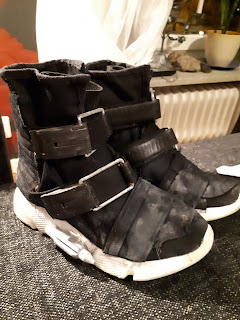 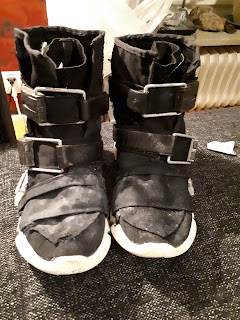 The shoes are finished. I am already thinking about redoing them though. There simply are a bit too many details that are a bit off. At te same time I'm really happy with the general look of the shoes, and they were a lot cheaper than buying a pair of Demobaza Moon Rovers, the kind of shoe that was bought and modified for the original costume. They cost €400, while my shoes probably ended up with a total price tag of $80, and most of that was the price of the shoes and rockets.e

All the hard parts for Enfys Nest, except for the helmet and the decorative teeth, are going to be 3D-printed. The Enfys Nest costume community has done a great job in sharing files for basically everything that you need. There is even a file for the helmet, but that would be a huge print. I am glad that I have friends with 3D-printers and they have helped me to print what I need.

This week the first box arrived. 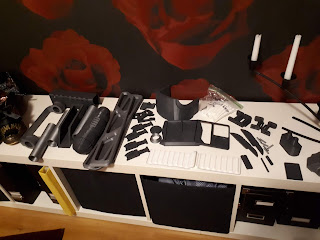 The biggest parts are for the electrostaff and the chstbox, then there are a lot of small things and greeblies. I also have a bag of resin teeth from a person in the Enfys Nest community.

Now even if it's 3D-printed, that doesn't mean that it's just to start assemble it all. The 3D-printer builds up the pieces with a lot of strands, so a lot of the surfaces have rills and grooves. The person who printed this for me has been really nice and printed it a very fine resolution, but tere are still rills that are both visible and possible to feel. During the weekend I have started to sand down the rills so that the surface is really smooth. 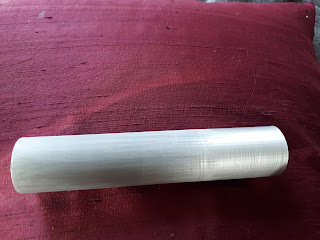 The matt side has been sanded, while the shinier is still unfinished. I work with three different sanding papers, from a coarse to a very fine one. The best way to judge if it's smooth enough is to feel with your fingertips, they are a lot better than the eyes for that kind of judgement. I also used the nail, a smooth surface gives another sound than a the rills with going over it lightly.

It's a good thing that it's been a big TV-sport weekend, so I've been sitting in the sofa watching skiing and sanding, and sandning until my fingers and hands have started to cramp. I have more sanding to do, and then it's time to prime, sand some more and then it's finally time to start putting it all together.
Posted by bandykullan at 20:02 No comments: