My costumes at Celebration Anaheim

Costumes are one of the best things about Celebrations, it's just wonderful to see all the talent and creativity that are out there. My main costume was the gold handmaiden costume, and I did manage to finish it in time. I will try to do some more posts about finishing it, but since I was stressed at the end I didn't take a lot of photos.

I wore the handmaiden on the first day, so that I could bring it to the Rebel Legion Galactic Senate Detachment photo, that's the subgroup for senatorial and royal costumes.

I was happy to have my photo taken with "my" Amidala. 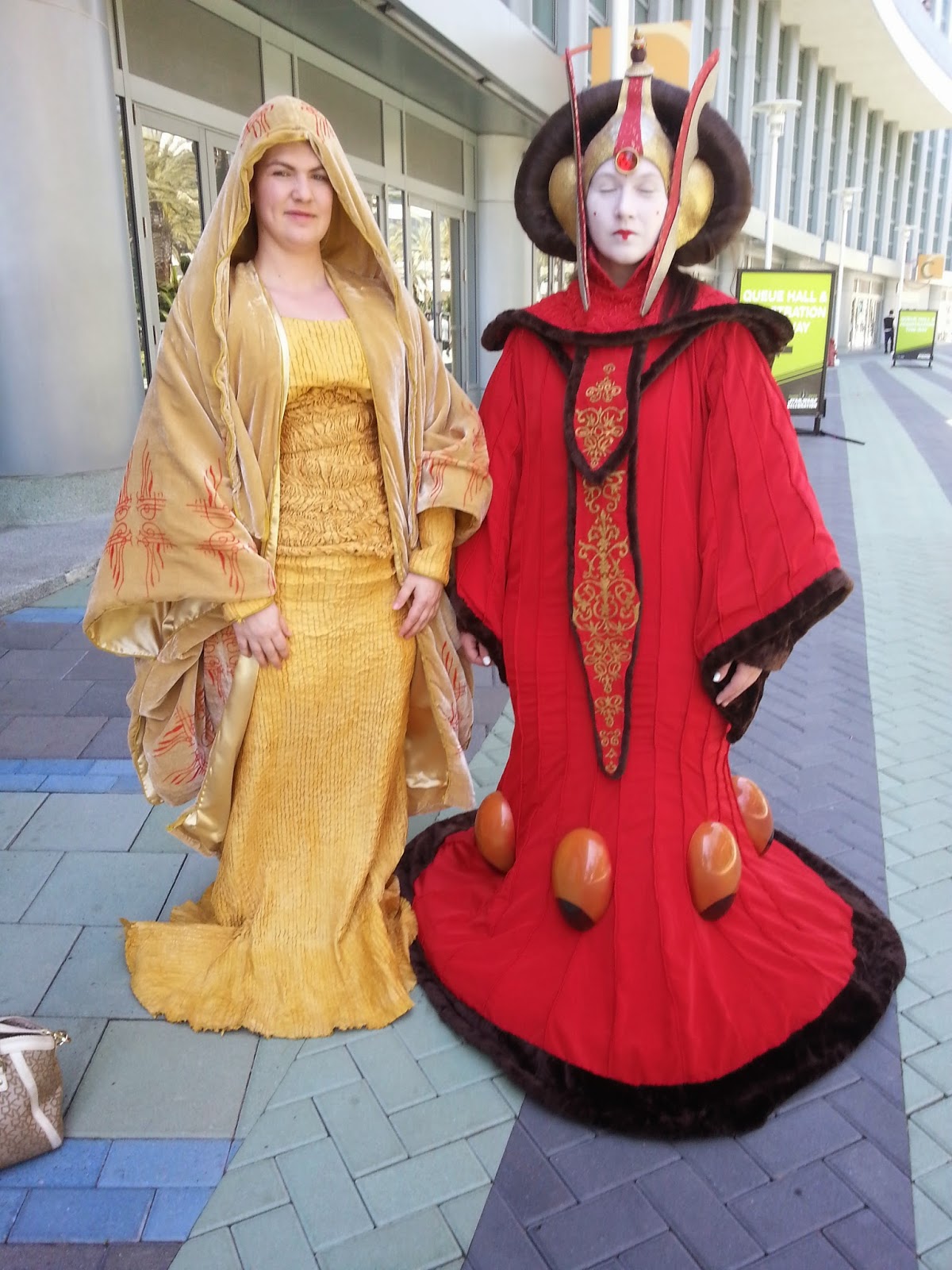 Wearing a corseted velvet hood and robe in the sun and heat was too much though, so even if I had planned to wear it the whole day I changed into my Endor Trooper for the rest of the day. It also wasn't easy to walk in it. The round circle held it's shape pretty well when I was standing, but I need to make it sturdier to I can kick it away from my feet when walking. I have an idea on how I can manage that though.

That evening the Rebel Legion and 501st Legion had a social event in the evening, and my Celebration/Convention companion David had come up with the idea that we should really dress up for the occasion, and so we did. It was a lot of fun, and that ballgown is a bit heavy, but it's perfect for travelling since it doesn't wrinkle at all. 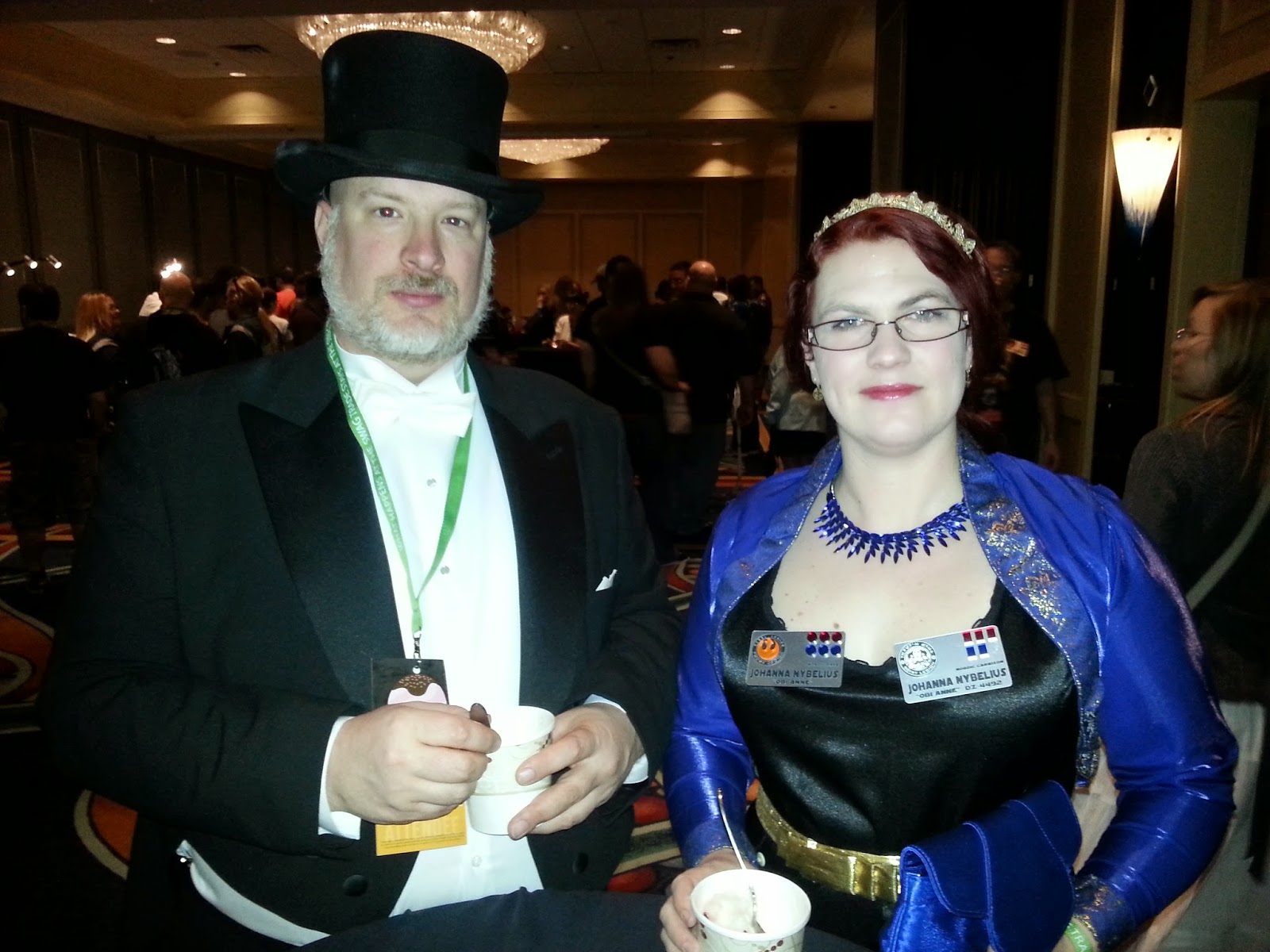 On Friday it was the main Rebel Legion photo, and I wore the handmaiden for that, but then quickly changed into the Endor Trooper again. I love the Endor trooper at cons, it's so comfortable and has a lot of pockets for all the things you need to carry with you. In the afternoon I took part of the Rebel Legion Trooper march, where we trooped all through the convention centre in formation. I hadn't brought my backpack, and I have lost my wrist comm so I felt a bit underdressed, compared to the other troopers, but I got inspired to continue to add things to it.

On Friday it was also the Cosplay Contest, but I didn't go to it. I was part of a panel called "Ladies of the Legions" - about female Star Wars costuming and it was scheduled against the cosplay contest. In the panel we talked about opportunities, challenges and problemsolving revolving around female costuming.

Saturday was the day for the 501st photo shoot, so I had slated Saturday to be jawa day. Then I got scheduled to do a Queen Amidala make up presentation for Saturday as well. Then Del Rey, the publisher company for Star Wars books, had declared Saturday to be Aaron Allston appreciation day, and they were having an Aaron Allston tribute panel. Aaron Allston was a wonderful authour and person that passed away too soon. Since he was known for always wearing awful shirts one way of honouring him was to wear a hawaii shirt. That total mash up made me run around like this all day. The tiara was added when I looked myself in the mirror in the morning and I realised that I looked really silly and needed something to just top off the look, thankfully there was a Disney/Souvenir store in the hotel. 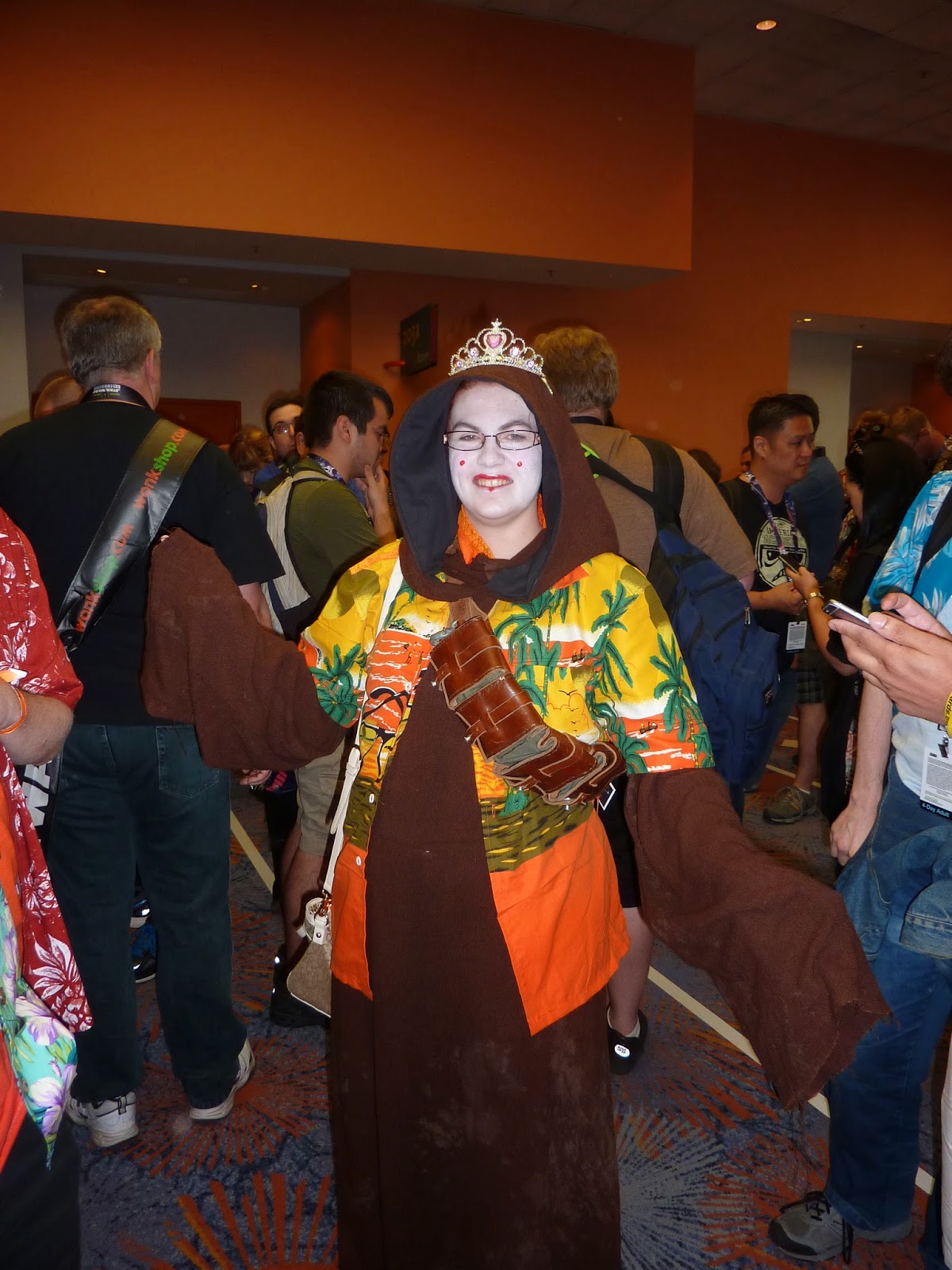 It was really comfy though, the jawa costume isn't very hot when you don't wear the mask, so this is definitely a costume that I'm going to develope for future cons. Well the Queen I'majawa look, not necessarily the hawaii shirt.

Here is me and Joslynn after our make up presentation, where I basically went through the tutorial from this blog, while Joslynn was putting on her make up live. I had removed the shirt and the hood for that. 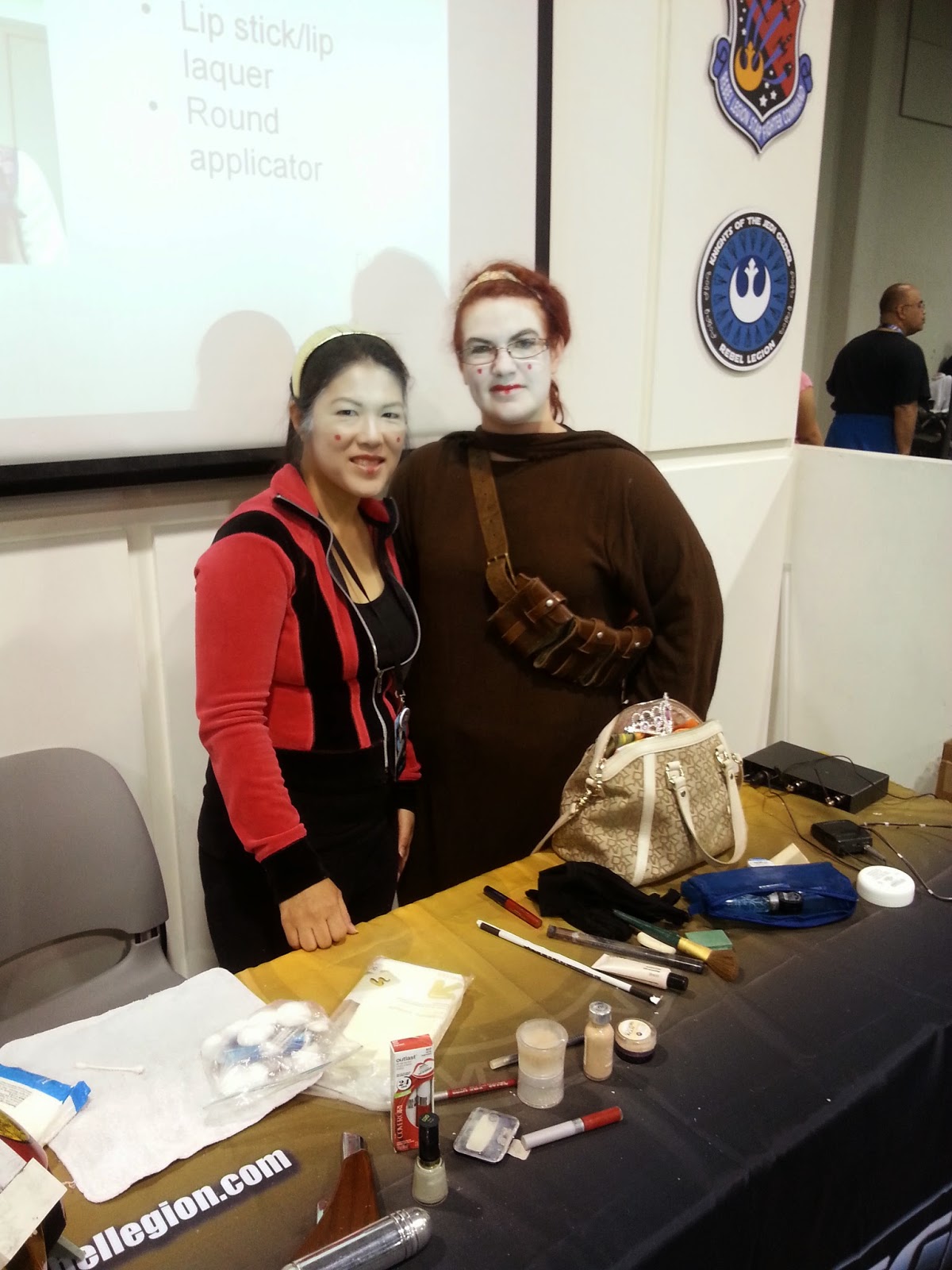 After the presentation I dashed off for the 501st photoshoot, only to realize that it would take too much time, so I would miss the Aaron Allston panel. I chose to go to the panel instead. Being with friends talking and hearing stories about him was brought both tears of sadness and joy, which is exactly like Aaron did when his wrote his stories.

On Saturday the group that I spent most of the time with were pretty tired, and they were going to line up early to get into a specific panel on Sunday morning. I went up to my hotel room, but wasn't tired, so I decided to try and roll up my hair and do pin curls for the first time. I could actuallly sleep on the curls, unlike when I've used rollers, and even if I only did a fast and dirty job with them,  I can definitely see that it will be worth practicing doing them. I did roll up my hair because on Sunday I had decided to not wear a costume, but my Star Wars cocktail dress, together with a fabulous pearl necklace with an R2 pendant that I had picked up from Her Universe. There were definitely a lot of dresses made from Star Wars fabric, but I think I was the only one with  a tight skirt. Most others were variations of a corseted or tight bodice and a poufy skirt. Once again I was actually glad that I hadn't bothered to bring the can can trooper, since there were so many corset/skirt combos there.


I had a great time in Anaheim, but with more than 100 000 tickets sold there was a lot of people there, and the only sad thing is that I didn't meet all the people that I wanted to meet and talk to.

Posted by bandykullan at 16:31 No comments:

Other people's costumes from Celebration

There are so many wonderful costumes at a Celebration, so this is just a small selection of my favorites. I noticed that I have almost only taken photos of quirky and fun costumes, rather than the grand perfect reproductions.

These were some nice AOTC Padmés that I found wandering the floor. I was especially happy to see such a nice version of the travel gown, the one to the right. It's hard to get that one right when it comes to the proportions of the headdress, and she had also used the fanmade print that's available on spoonflower to get the right pattern on the fabric. 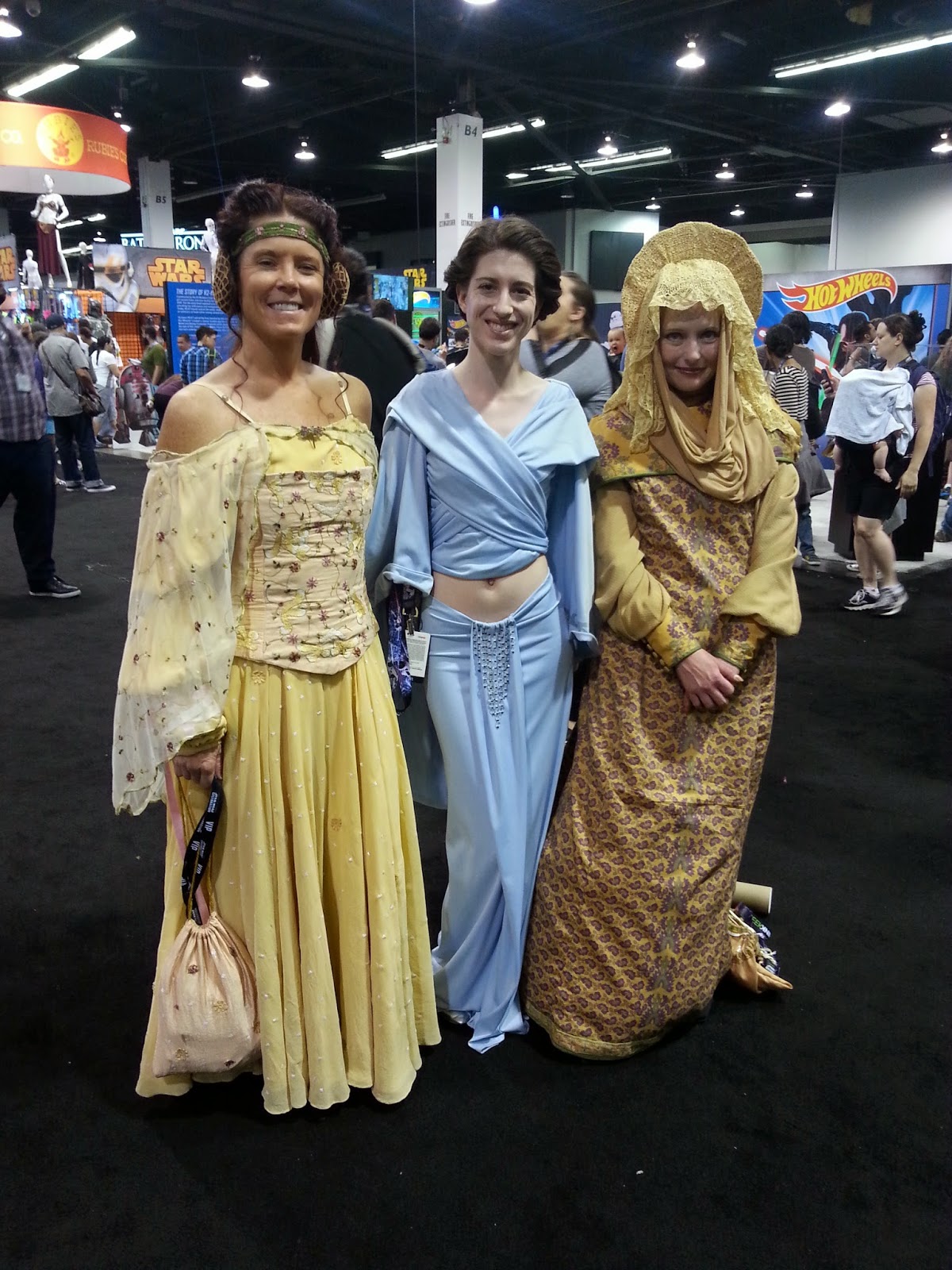 An unusual Padmé that I saw was this version from the first animated Clone Wars cartoon, the one that aired back in 2004, not the latest Clone Wars. 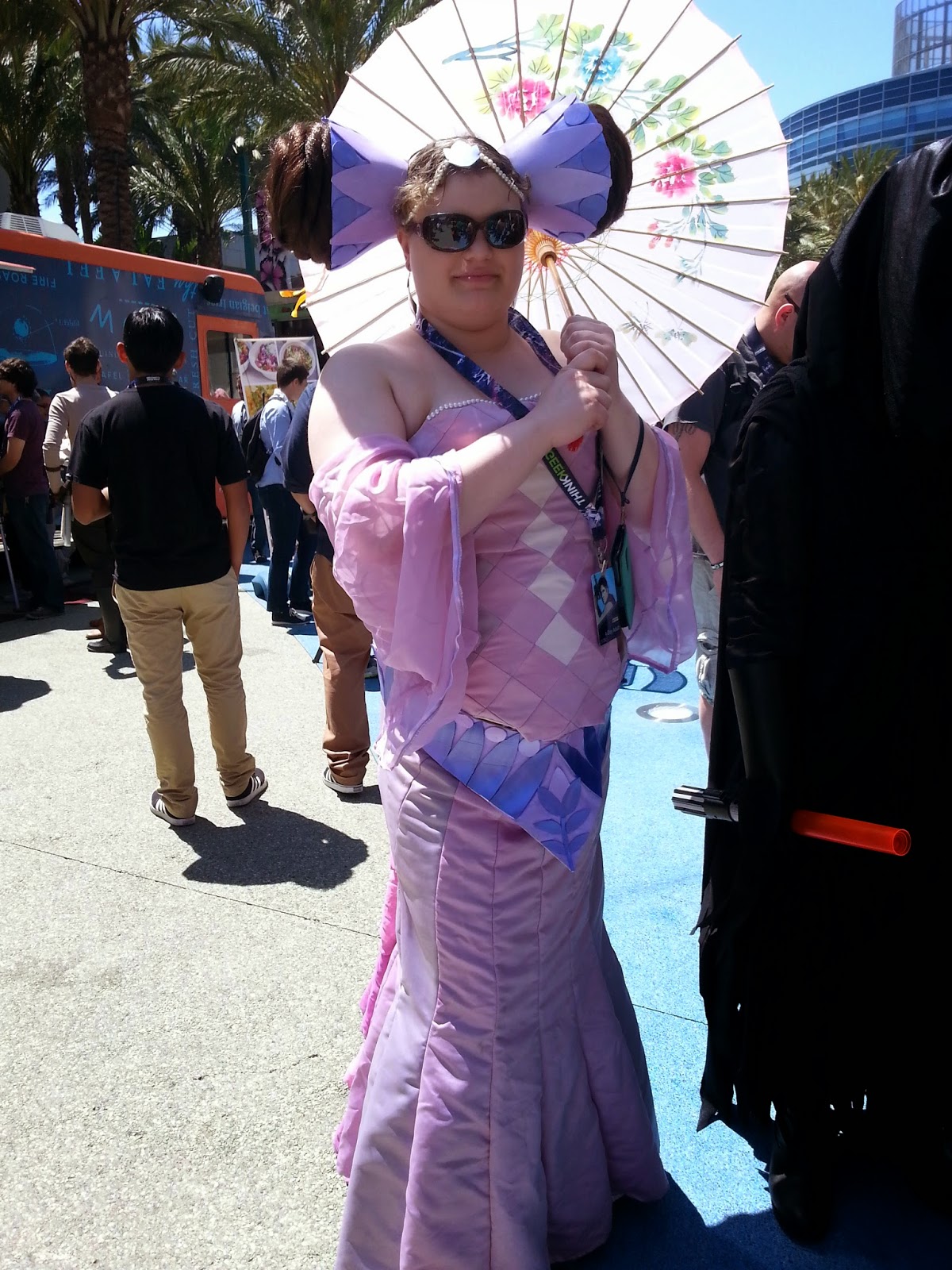 It wasn't a costume in itself, but the best transportation was this speederbike on wheels that rolled around outside of the convention centre. 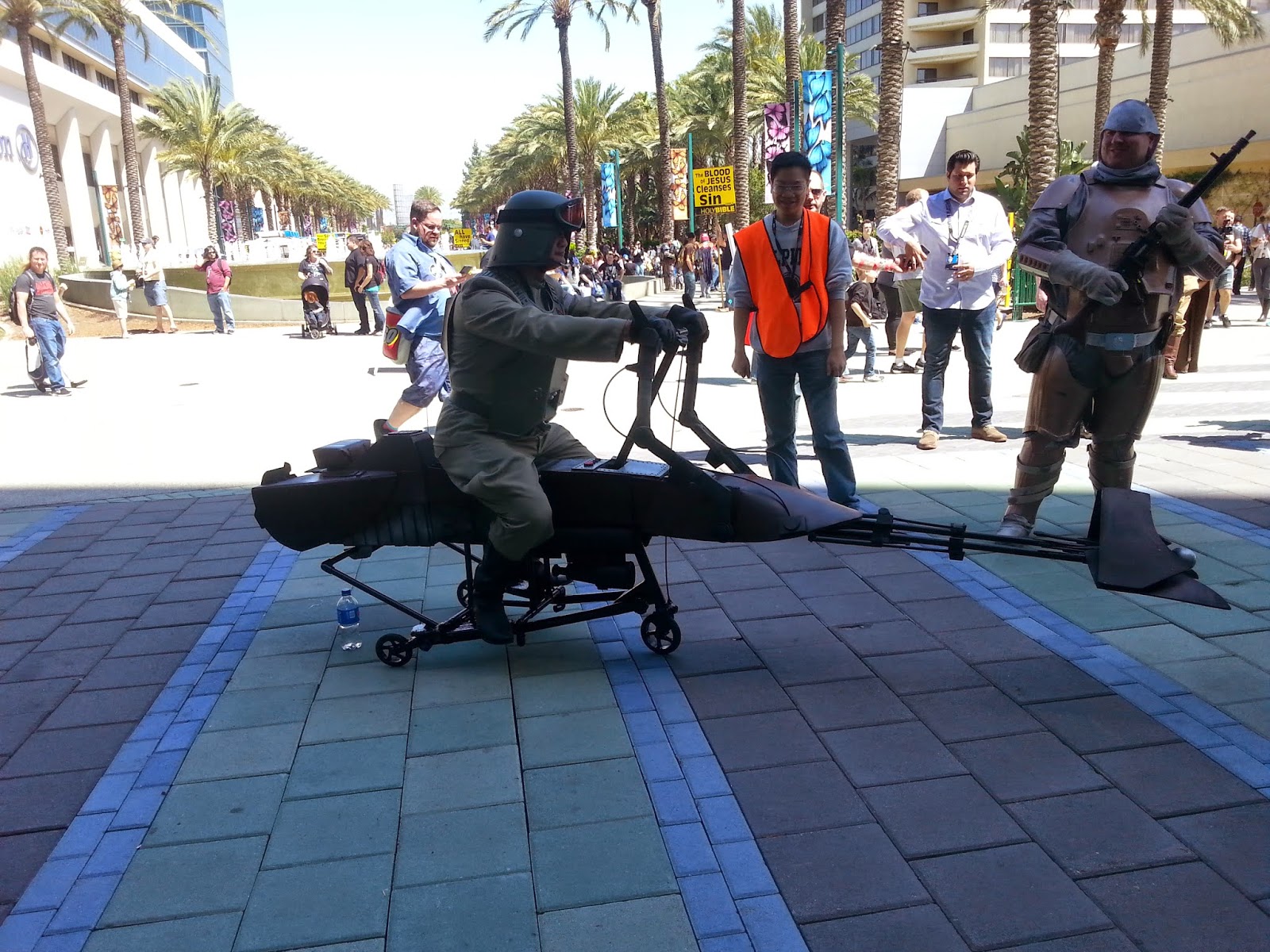 It was quite hot, so it's understandable that this stormtrooper had opted to go for the beach attire. 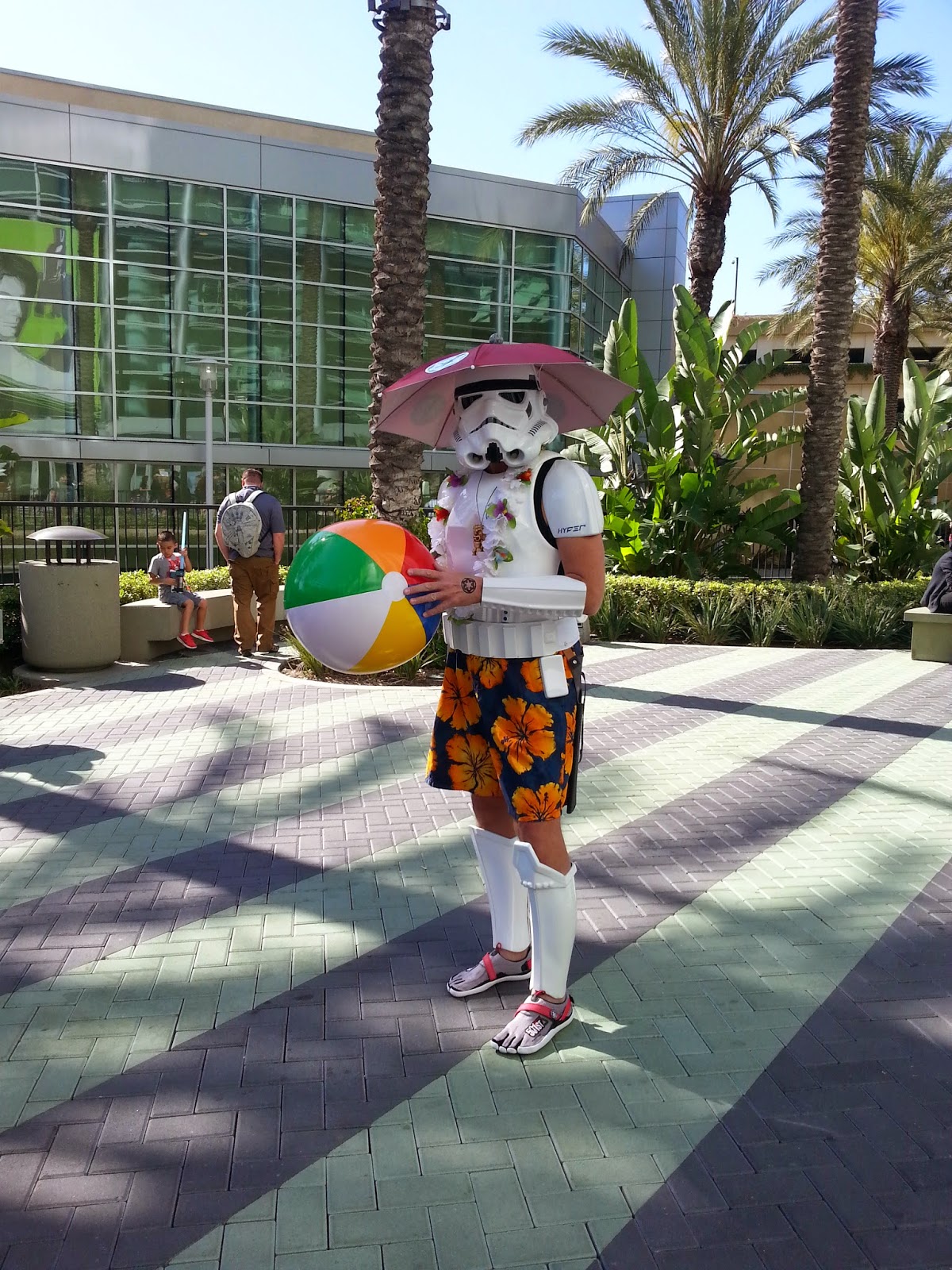 On Saturday I was really happy to meet imperial Pinkie Pie and Rainbow Dash on their way to a party. 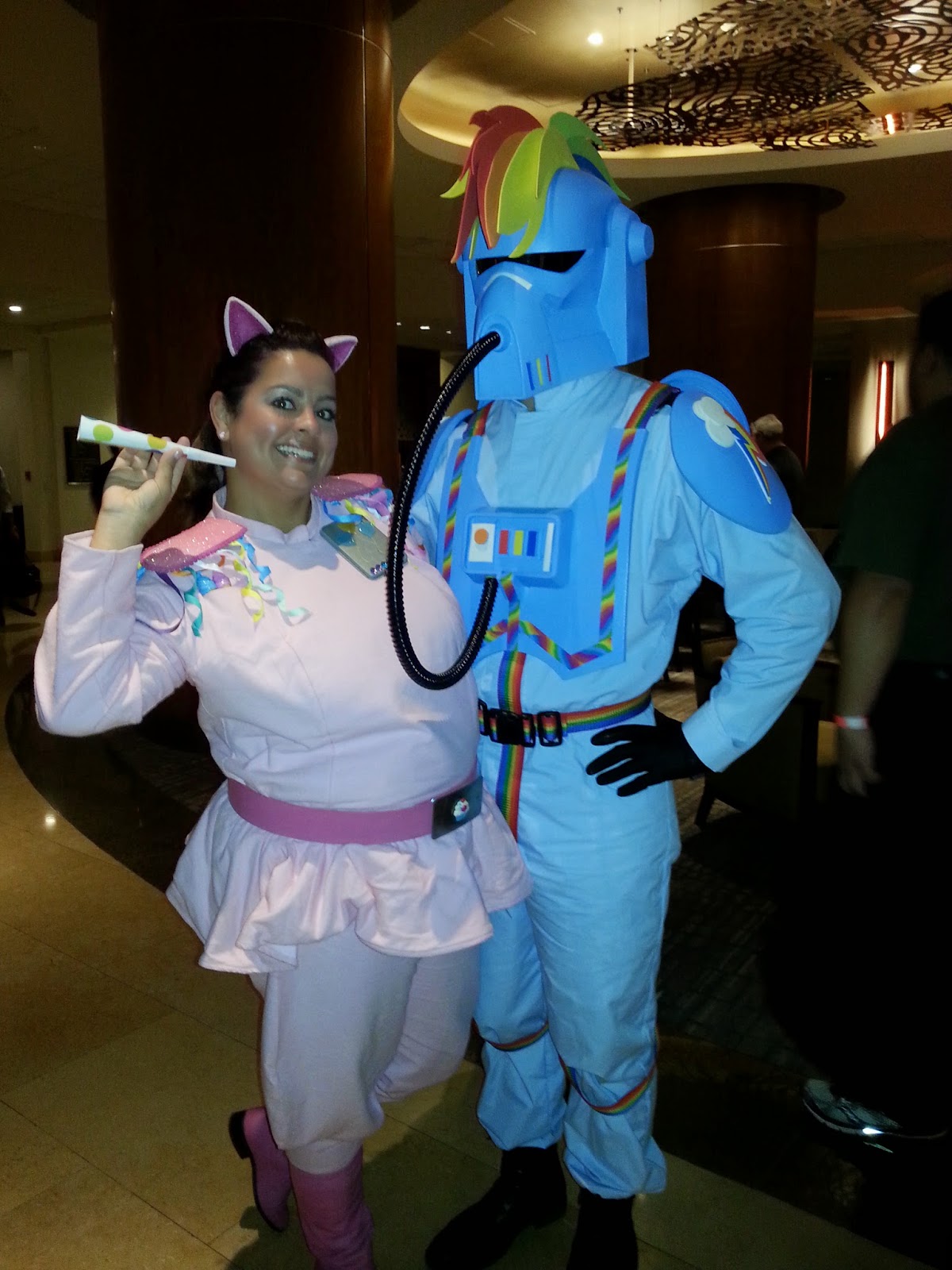 I wonder if they maybe themed up with this ewok, they are after all good when it comes to partying. I saw a few steampunk and Rosy the Riveter-inspired costumes as well, but I only got photos of these two. 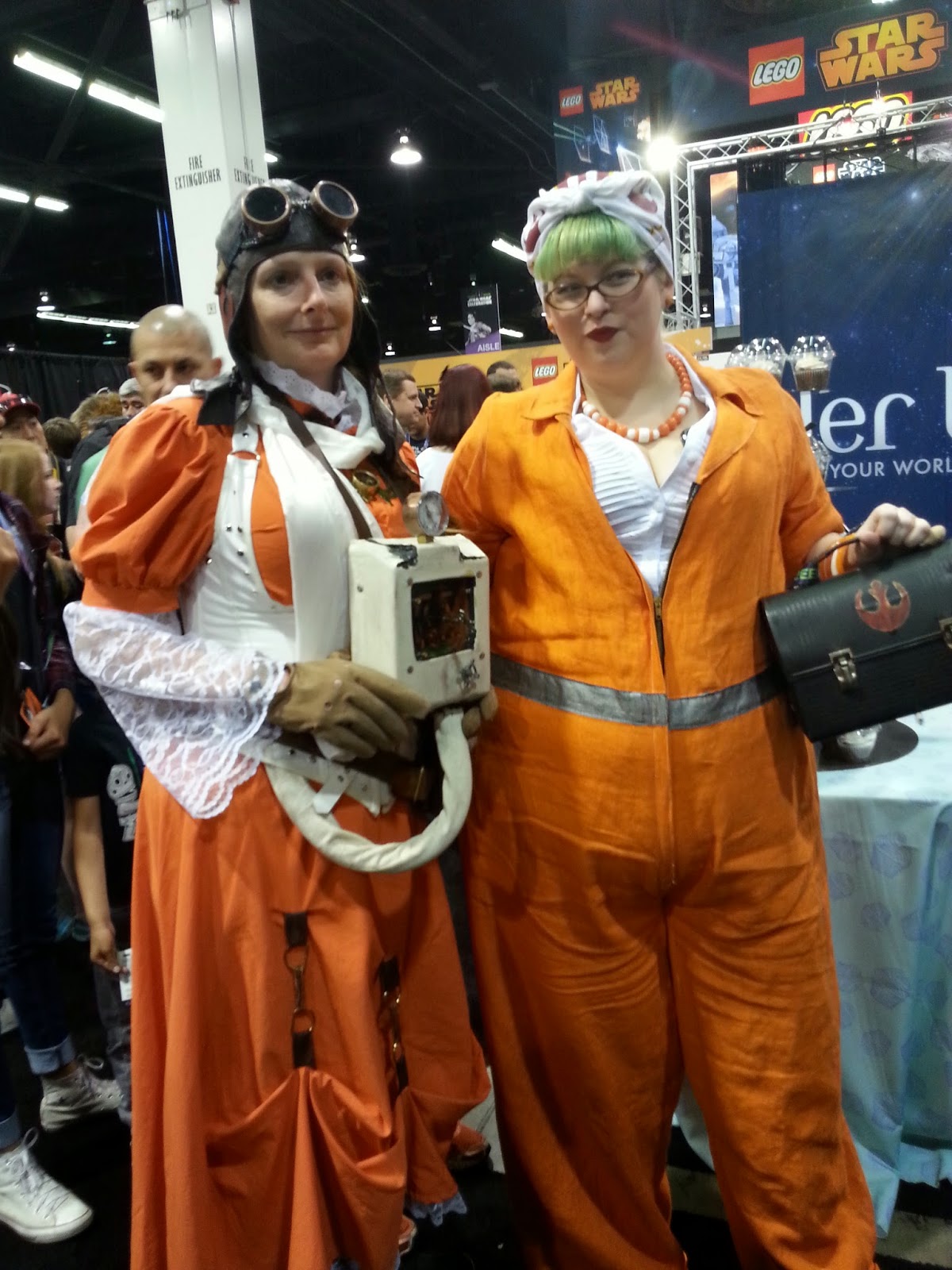 Maybe not so strange there is quite a huge variety of Padmé and Leia-inspired dresses. My favorite Leia was this regency Leia. 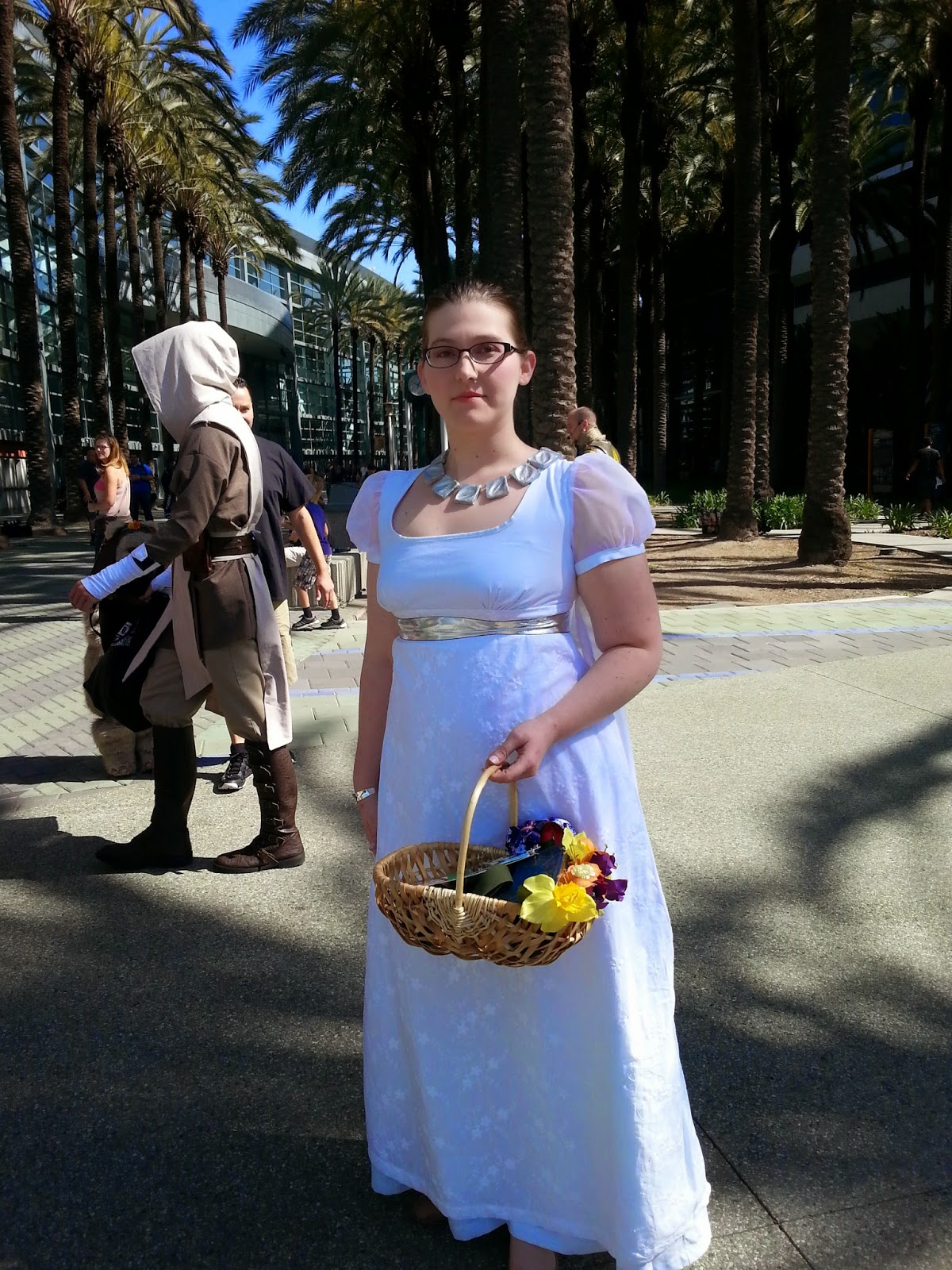 A group from Rebel Legion Sunrider base had also created their style of comfy handmaiden costumes, I was quite jealous of them when I saw their attire. 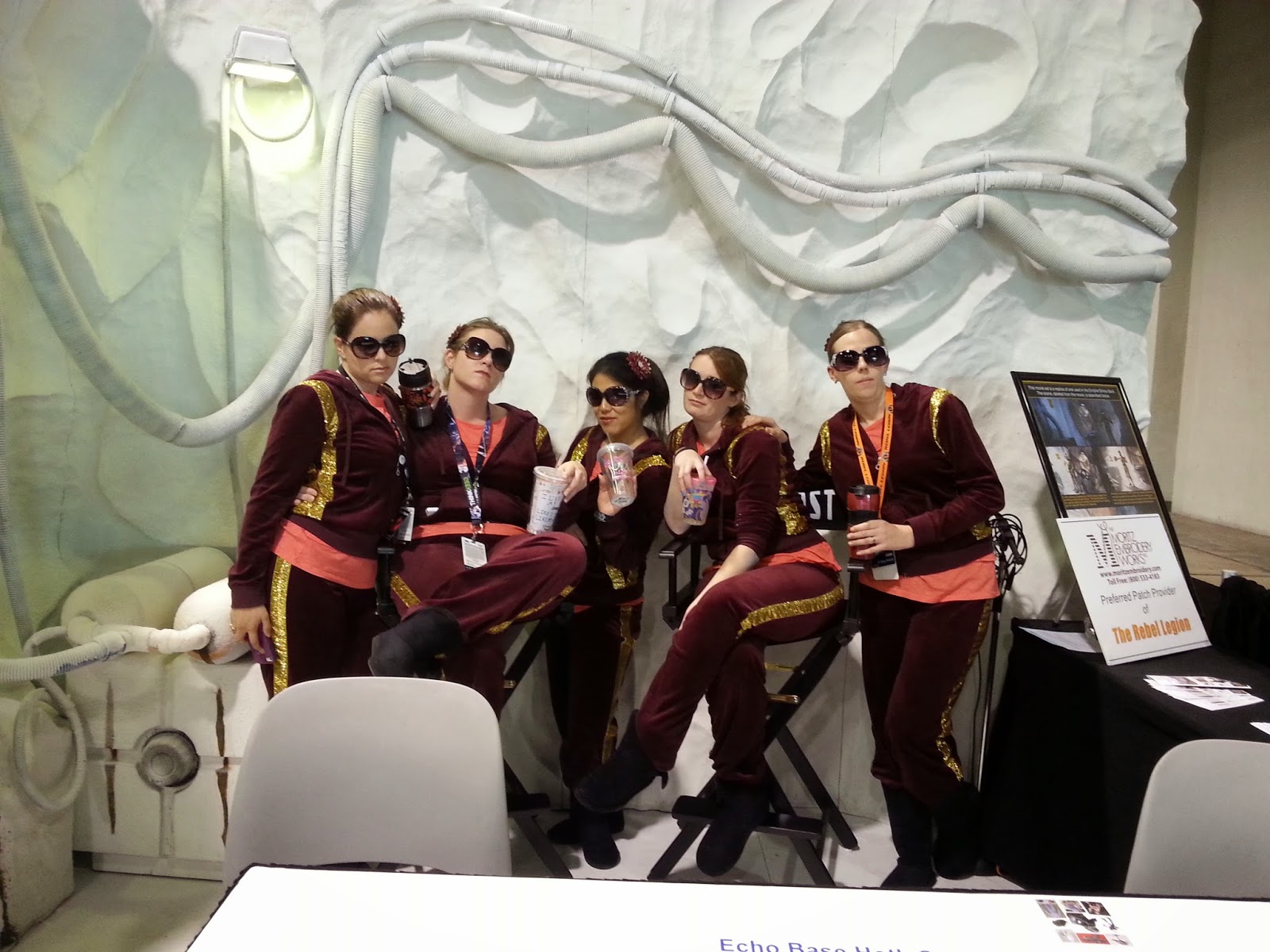 My top favorite of all the costumes that I saw was this elegant, beautiful and very intricate Queen Amidala-inspired dress. It was simply gorgeous and a lot of work had gone into the details of this dress. 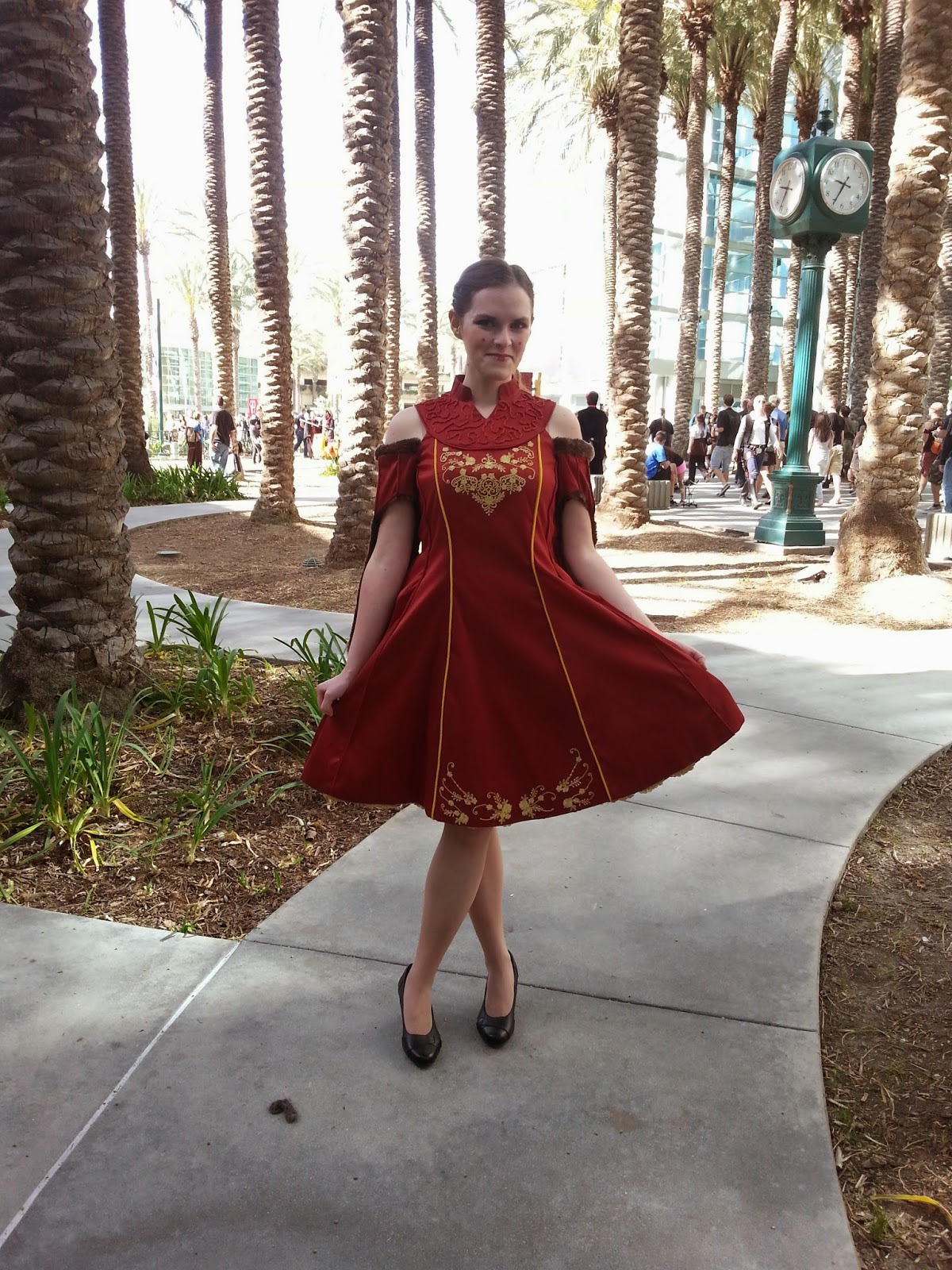 As I said there were a lot of wonderful costumes this is just a small sample of it all.

So Star Wars Celebration is over. It's been one of my top 3 Celebrations and I've had a blast even if I missed out on a lot of things I had planned to do. I'm going to do a proper con report when I get back home again, but as a teaser here is a photo taken with my phone when the Rebel Legion gathered on Friday, and yes I am wearing the gold handmaiden in the photo.

And tomorrow me and my travel companu head for Las Vegas. 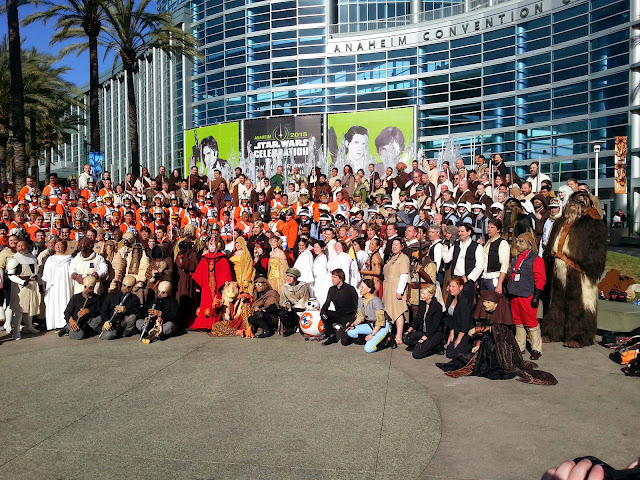 Posted by bandykullan at 07:54 No comments:

Email ThisBlogThis!Share to TwitterShare to FacebookShare to Pinterest
Labels: convention

I'm on my way to Star Wars Celebration, but on the way I stopped by Uppsala, and it just happened that today some of my friends in historical costuming had a day for making hats. So I stopped by a store and bought a floppy straw hat, then I spent the day cutting off a part of the crown and flattening it before reattaching it. I also sewed two rows of millinery wire to make it less floppy. So now I have a base and it is just to trim it.

One of the persons there was also kind and gave me a copy of a pattern for a tricorne hat, so now I know what I'm going to do for the HSM challenge when I get back.

See you all again in two weeks or so. 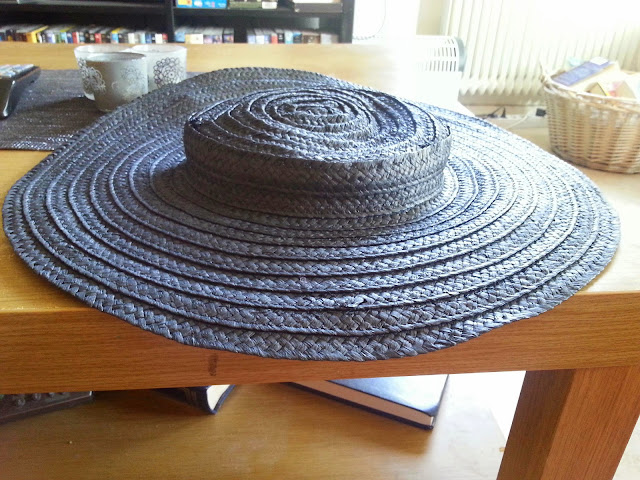 Posted by bandykullan at 17:19 No comments:

Email ThisBlogThis!Share to TwitterShare to FacebookShare to Pinterest
Labels: hats

On the finishing stretch

So with not much time left, I don't have time to take photos of my progress and blog much. Over the weekend I've tried to get a lot of things done, unfortunately some things have been much slower than I tought. Not helped by the fact that I had bad blood sugar levels yesterday, I have diabetes type 1 (the auto-immune disease not the lifestyle one) and on some days I simple have problems focusing and I also get some impaired judgement, which unfortunately is visible in the results.

Hood - finished (yay)
Robe - not even started
Obi/Sash - Need to do some handstitching and add grommets for the back
Undergown - still needs to cut and starch the hem, otherwise it's done.

Posted by bandykullan at 09:25 No comments:

After what have felt like an eternity of pleating I have a skirt for the gold handmaiden, and with that I'm starting to beleive that I will actually finish the whole costume and be able to bring it with me to Celebration. 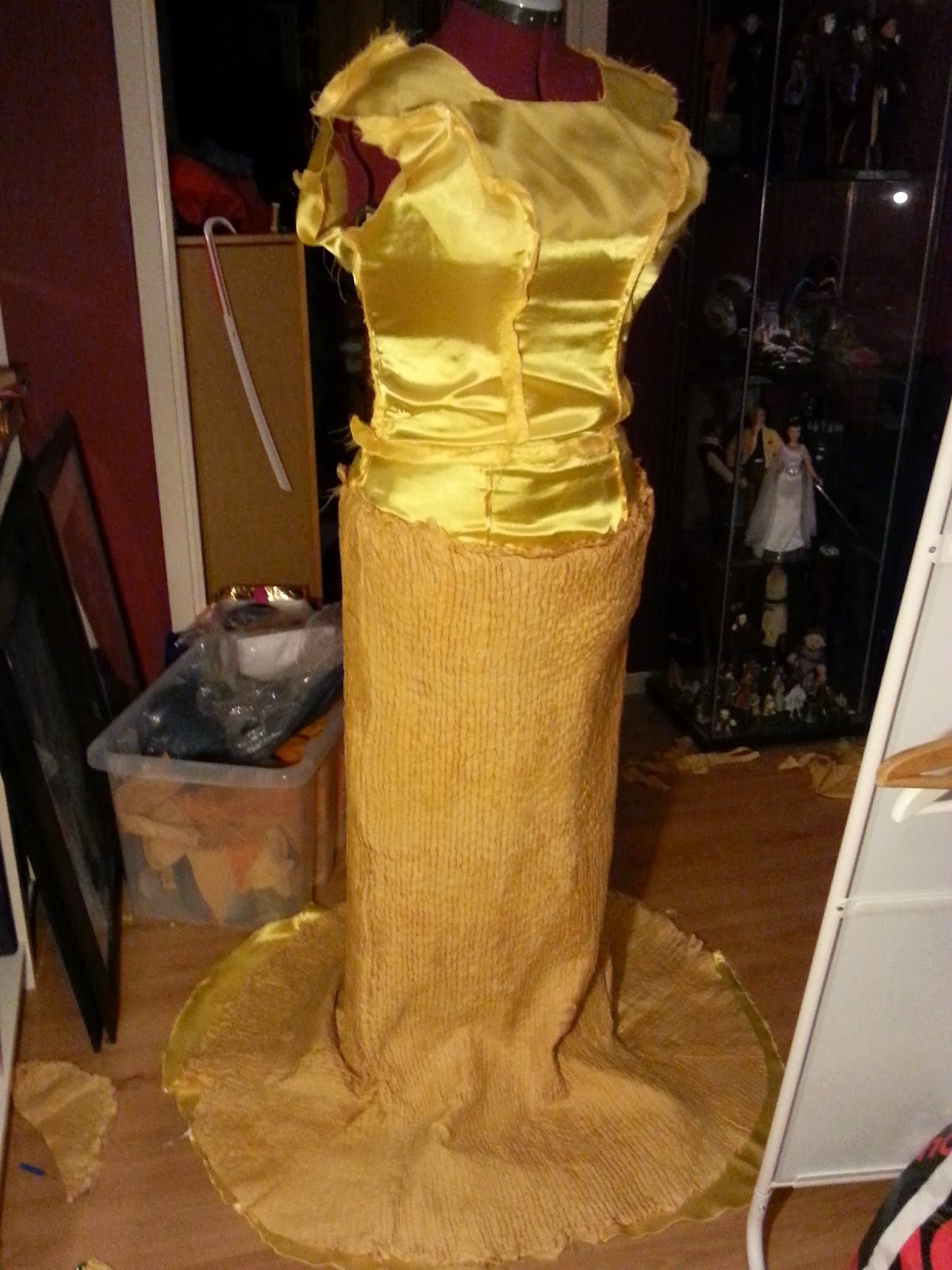 There are still details left. One of the most important one being that I need to starch the circle and finish the edge of it, without hemming it. I have an idea on how I will solve it. The main problem though is that in order for it to lie completely flat, I have to stand inside it, since the feet for my dress form are creating the bubbling issues that you can see. That bubbling also happens as soon as I move around in it. It's actually not impossible to walk in it, but every time I move I have to bend down and flatten it out. I hope I can solve it with even more starch.

Also from the leftovers from the skirt I have managed to piece together a bodice as well. I had hoped to get it done as well tonight, but I feel dead tired, and that's not the correct time to start fiddling with something new. Still I will set a goal to finish the undergown on Friday, then I can take Saturday and Sunday to work on the robe and hood, and then I have Monday to work on the sash/obi. That's my plan anyway.
Posted by bandykullan at 21:18 No comments: