I've just come home from a short holiday in London. Since I had most of the days just by myself, and since I have already seen most of the "must sees" in London, I had decided that it was time to do some fabric hunting. I first went to the Swedish sewing forum sysidan.se and found this thread about fabric stores in London I also found the blog Tilly and the Buttons, and her recommendations for fabric shopping. Both places recommended Liberty, Goldhawk Road and Walthamstow.

I spent the first day in London in the shopping district around Oxford Cirkus, so of course I went to Liberty. Since my focus is mainly on finding fabrics for historical costuming, or Star Wars, I didn't find anything that caught my eyes there. It's mostly prints, so it must be a heaven for quilters, but not my kind of fabric store. On my last day I decided to visit Goldhawk Road. It was mostly because I was quite tired and it's closer to central London. It's still in zone 2 on the Tube so I could go there on my daypass, unlike Walthamstow that's further out at the end of the Victoria line.

Goldhawk Road was great. A full street with little shops with Sikh owners that were really friendly, but not pushy when I went into their shops. Most of the fabrics were really shiny and glitzy poly satins, there were some shops that had a lot of prints as well. Once again I'm not really into fabrics with small flowery prints, or African inspired prints. The poly fabrics were cheap, at least compared to what I'm used to, but there were also at least one shop with quality, natural fibres. It was filled with nice tweeds, wools and linens. I of course ended up there and spent most of my cash in just one shop. 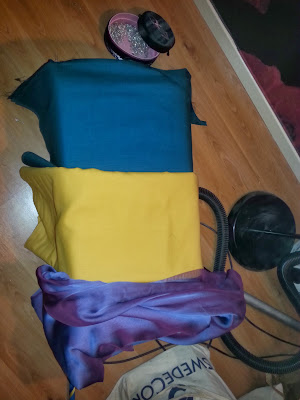 The one thing that is so great about being able to go to a physical store is just the inspiration that you get by seeing the bolts of fabric, and being able to feel them and compare them. That is nothing you can do on ebay. In the end I bought three different fabrics.

The two top fabrics are good example of me just getting floored when I saw them. They are a very fine and pure wool, great draping. I hadn't planned on buying anything like that, but the bolts were on top of each other and the yellow and blue/dark green colous just looked so great together that I knew that I wanted to use one fabric for something, and to trim it with the other. Now this wasn't a cheap fabric, it cost £20/m, but I'm pretty sure that I would still have to pay the double if I found anything like it around here. My thought definitely goes toward a little 18th century jacket in the blue/green fabric with yellow trimmings.

The third fabric was a changeant poly chiffon. This one was really cheap though, £2,5/m. I've been on the lookout for a changeant chiffon to make a new veil for my Amidala Purple Travel gown, and this might be it. I have to see if it's a tad too dark though, I guess I have to see it compared to the rest of the gown and in different lights. Otherwise I'm thinking about doing a simple bias cut party dress out of it. I have a vogue pattern for that kind of dress that I haven't tried.

It was definitely fun going on a fabric safari, and maybe next time in London I might even go to Walthamstow.
Posted by bandykullan at 23:37