Sometimes inspiration comes from unexpected places, and sometimes it's just the time and company that feels right. I'm not a Ghostbusters fan, I've never understood how the original film can be so popular. It's an ok film, but I've just never thought it was a great film. I did grow up with the Ghostbusters cartoon on TV and I had a Ghostbusters boardgame, that I don't think I ever finished since it took several hours to play and we usually stopped Before reaching the end, so it's still a bit of my childhood.

When I heard that there was going to be a new Ghostbusters film I mostly felt that it was a bit unimaginative. When I heard that it was going to be female Ghostbusters team I though that sounded great, and then just watched all the internet fanboys go crazy with male entitlement. I finally saw the film on Saturday, and in general I think it's a good popcorn flick. I enjoyed it, but nothing I would become a fan of. Still after having seen it ArtyAnna posted on my FB that we need to make a GB team, and I thought that was a great idea.

One should also not underestimate the fact that it was so nice to finally see a character in my own bodyshape, Melissa McCarthy's Abby, and that I won't have to hide what I look like to make the cosplay. There are Three of us now that are making a GB team, and it's such a nice feeling to keep in contact, discussing references and then decide together on what should do, instead of just working by yourself. First we are just aiming for the uniform, any hardware and gadgets will wait until there are more available references. 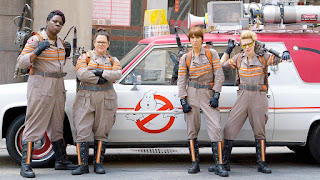 Hopefully we will be able to receive your call in December