So I'm basically done with my X-wing pilot. As I suspected it's been pretty weird not having to do much sewing to fix a costume. The sewing that I did was the flak vest though, and it turned out to be a bit worse than I had thought when I started it.


Let's start from the beginning. The flak vest is the white thing worn over the orange jumpsuit, but under the plastic chest box. Here modelled by Luke Skywalker, even if he's wearing it backwards in this photo like it was done in Empire Strikes back.

The flak vest is also one of the trickier parts of the costume, since it's not a one size fits all. One of the most common reasons for getting a pilot costume rejected is becase the flak vest is too big and goes all the way down to the waist. 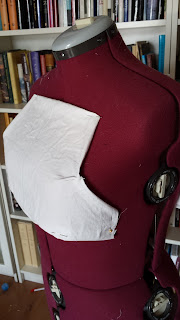 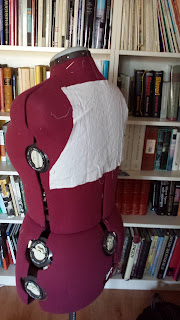 I started out with simply cutting out a pattern in cotton and trying it on my dressform. The problem was that when I got happy with the look of it, I would not be able to get as many channels with ribs in, as the Rebel Legion standards call for. After having asked a Rebel Legion Costume judge if it was ok to continue, with less ribs than in the original I got the impression that would be ok. 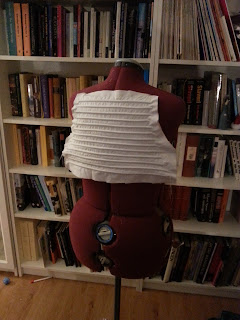 This was the first version of the backside of the flak vest. Some things with it seemed off though. The ribbed pattern comes from making channels in the vest, it's actually two layers of fabric, and then inserting plastic tubing into every other channel. The empty space between each rib should be equal the size as the rib, and to me it looked as if the empty space was larger. After doing some tests on scaps of paper I realized that the channels are not all the same size. When you put tubing into a channel it takes up some of the fabric and the channel looks more narrow.

So I redid the backside now with each channel for a rib being 1 cm, but the channels between the ribs were 0,5-0,75 cm. Here is the finished backside 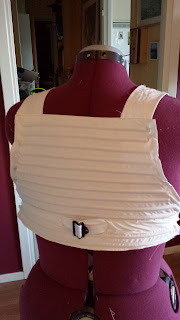 The front had a bit of a challenge, since I'm not as flatchested as the male original pilots. In order for the front of the flak vest to actally curve around my breasts I had to make a sharper curve than what I had seen on other flak vests. 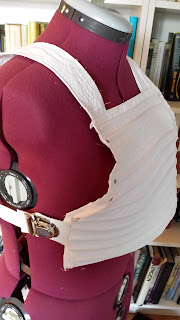 Some woe with the vest came from my decision to use an ugly plastic coated fabric.  The only way to be able to feed it into the machine was to use my roller foot, but it still  slid a bit uneven when I was working with two layers.

The buckles were all bought from wampawear, where I ordered my flightsuit as well. To me the side buckles look a bit on the large side. For the tubing I used the 3 mm (outer diameter 5 mm) clear plastic tubing from Clas Ohlson. 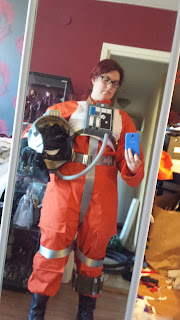 Here I am in the full gear, I'm hoping to get some feedback Before I take proper application photos and send them in to the Rebel Legion.