My plan for Easter was to really get going on TLJ Leia or Admiral Daala, but when neither the lining for the TLJ Leia or piping for Admirala Daala showed up before the holiday I had to change my plans. Still a long weekend with a lot of time is a great time to sew. I started to think about the April challenge for Historical Sew Monthly, and realized that I had no idea what I wanted to do. The Theme for April is "Buttons and fastenings" and I wanted it to fit with my 16th century project. I needed to work with what I had at home as well.

One common accessory for the 16th century is the gollar, a kind of short cape that only goes down to the bust. It's small so I could use some of my red wool, that I got from my mother, without eating too much into it, and it's of course necessary to close the gollar with something.

Now most pictures of gollars show them closed with either clasp or an invisible closure, probably hooks and eyes. I decided to go for buttons and to make the buttons myself. I will cover the gollar in a later post, this will be about the buttons.

I found this great tutorial on how to make thread covered buttons at Matsukaze Workshops. Instead of just repeating it, here are my comments to it.

First you need to make a base for your button. If you don't have any wood blanks around you can make it out of fabric. I used this tutorial from the Medieval Tailor. 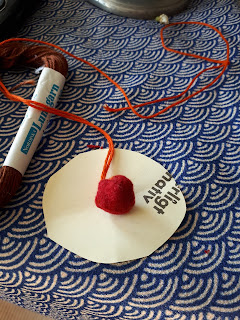 It takes more fabric than you think to make a button. Here is one of my cloth buttons laying on the paper template I used to cut out the fabric. Now of course you can make saller buttons, but I wanted them to be fairly big and visible.

Once you start covering the buttons you need more thread than you think. My first try button didn't get completely covered, eventhough I wasn't covering it very tightly. It is a bit fiddly working with the long pieces of thread, both the shank thread and the thread you are using for covering but it worked out in the end. I used some kind of cotton thread/yarn that I found in my mother's stash among the embroidery threads. It's not floss, and it's only one strand of thread to work with. Of course using cotton doesn't make it totally accurate, but it looks accurate enough. 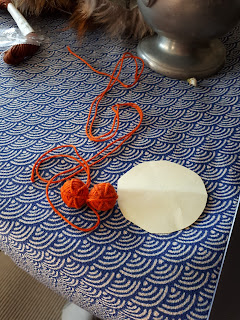 To fasten the buttons I made button loops. 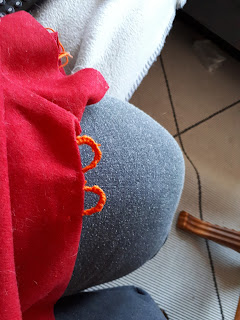 To get the right size ont he loops I first sewed the buttons on, so that I could measure around them for the loops. I made the loops quite snug, and the inside diameter stays the same even if the loop gets thicker. For the loops I used three strands of the same thread as I used for the buttons, and then I covered the strands with a blanket stitch in double thread. The bottom loop was my first try, you can see that I got the blanket stitches more even on the top loop. In hindsight I'm thinking that it might have been enough to use just one strand for the blanket stitch to make it a more even. I used this tutorial for the button loops.
Posted by bandykullan at 10:48