We have come to that part of the year when it's time to look back and see what I have actually done. I will start with my Historical Sew Monthly challenges. I've participated in the HSM for several years, but most of the years I only finish a few challenges. This year I did manage to enter an item for every challenge. I have mostly made different kind of accessories, since they are the kind of small things that are easy to finish on short notice, and I also mostly use material from my stash.

This year the HSM has really challenged me, and I can definitely say that I have never entered things from so many different eras, even if I thought I would only be making 16th century this year.

January - mend, remake, refashion
Mend or re-shape one of your previously made historical clothing items, or refashion a new one out of something not originally intended as sewing fabric.

I took the challenge to heart and used a pair of net stockings to make a hairnet. 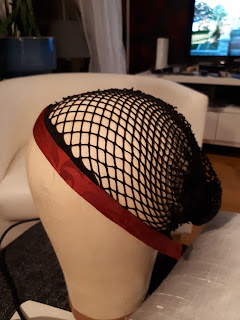 February - Under
make something that goes under the other layers

I made my base 16th century shift. I haven't had very many opportunities to wear it though, preferring to use my low necked shifts, I'm keeping this one for special occasions. 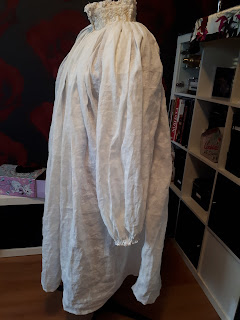 Original plan: None, but an apron is always a good idea

I used some quite coarse linen to make an apron that could work for many different eras, and it was used a lot over the summer. 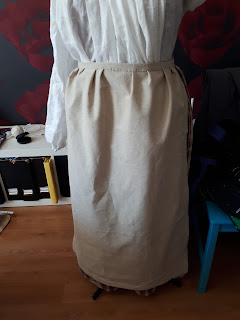 Original plan: Maybe a gollar with an interesting fastening

I made a 16th century gollar, I even made the buttons myself. I failed a bit with the challenge though, since I covered the buttons with a fur edge. This is probably one of my favorite projects of the year, and I'm happy with everything with it. 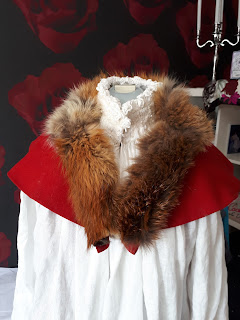 May - specific to a time (of day or year)
Historically, some garments were worn year round, and for a range of events. Others were exclusively for certain times of year, or specific times of day. Make one of the latter.

I made a 14th century night cap. It turned out to be a bit small, and not as warm as I had hoped, but it was a night cap. 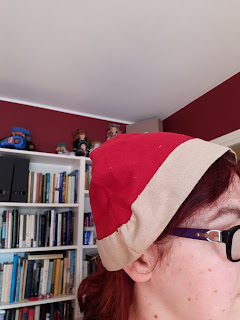 June - rebellion and counter culture
Create an item that pays homage to fashion rebels and clothes that flaunt their place on the fringes of standard sartorial society, or that was signature to a rebelling cause.

Original plan: the use of slashing in my 16th century gown

I finished my 1520's gown for this. I didn't do any slashing, but since I'm aiming for the kind of dress worn by the rebellious people of Dalarna in the 1520s I still fit it within the challenge. 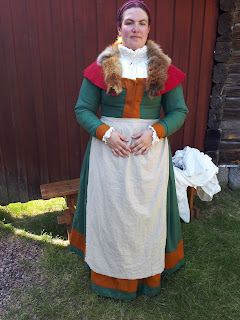 July - sleeves
There are some amazing examples of historical sleeves styles out there. Put the focus on the arms and shoulders in your creation for this challenge.

Ok, I didn't do an amazing style, but I made a pair of loose sleeves that I could pin to my late 15th century gown. 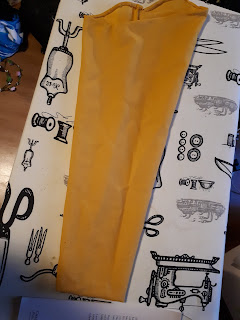 This was a really fun challenge. I made a Skjoldehamn hood based on the MA thesis that has been written on the Skjoldehamn find. This was a very useful challenge, in that I learnt a lot about how badly many historical garments are made, and that I don't have to worry too much about my own quality. 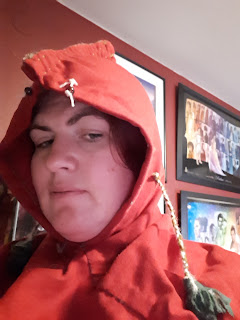 September - Hands and feet
Create a fabulous accessory for your hands or feet.

I did not follow my original plan, instead I made a pair of sewn woollen hose. 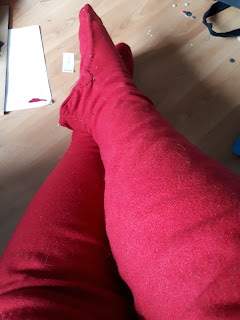 I did the less complicated project and made a second apron of the year, this one looks a lot better than the one from the March challenge though. 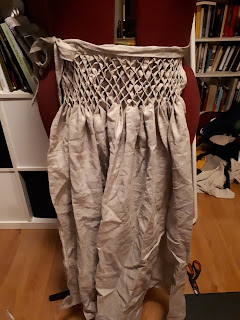 November - purse and bags
You’ve got your arms covered in July, your hands in September, now make something amazing to dangle from them.

Original plan: None, but maybe an 18th century pocket

In November I ran a bit out of steam, but I was not going to give up on the challenges with only two left. The problem was of course that I had already made 1790's reticule and a medieval pilgrim bag earlier in the year. In the end I found some scrap  pieces of leather and decided to make a pouch. Working with leather was new for me, and the execution could definitely have been better, but it fulfilled the challenge, and I had a practical pouch. 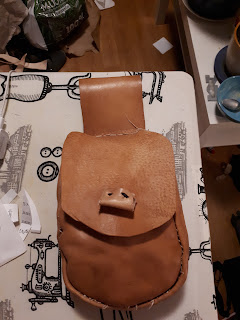 December - neglected challenge
Was there a challenge this year (or, if you’ve been doing the HSM for a while, in a previous year) you missed? Or didn’t create quite what you’d wanted for? This is your chance to make it up!

I had planned to do mitts both back in 2016 and for the September 2018 challenge, so finally after several years I finally hade an 18th century pair of mitts. They are so comfy, so I really ended the HSM on a high note this year. 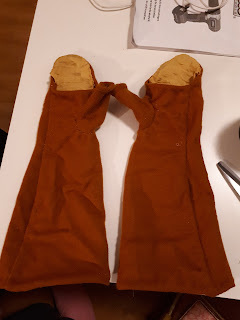 Here is a recap when looking back

Favorite thing I did as an HSM challenge - My gollar from April
Most unexpected thing I did - the Skjoldehamn hood from August
Most used thing - the loose sleeves from July
Most used fabric - I really have gotten a lot out of that red wool fabric my mother gifted me
Eras done - Viking age, 14th century, 15th century, 16th century, 18th century

Email ThisBlogThis!Share to TwitterShare to FacebookShare to Pinterest
Labels: HSM